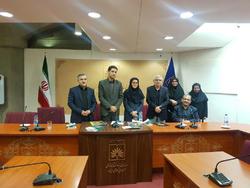 The main topic of the book is “Communications of Development” or development-promoting communications. This concept is chiefly used concerning the communicative policy-makings aimed at the development of a country or a region.

RNA - The session on the review of the Book “A Reflection on the Part of Islam in Communications and Development with Emphasis on Women’s Communicative Role in Society” was held on Sunday, September 8. The faculty members of Organisation for Documents and National Library of Iran reviewed the said book in the hall of the Cultural Institute belonging to the Iranian National Library.

Dr Aqarafiei, the author of the book, at the beginning of the session, elaborating on the characteristics of the book and the significance of writing this book, stated, ”Thanks to my carrier extending from 2000, when in the course of the ‘International Communications’ the issues on the development was introduced through the field of communications and the few existing Persian works on this topic, to present day, that there exist several books and works, composed by professors of communications sciences, I have found that there is a need for composition of texts on the issues of communications and development having an Islamic context.”

Therefore, in recent years, I have had some studies on this topic and presented two papers in the “National Conference of Moderation” on this issue. Indeed, a part of this book is the revision and update of the materials presented by me in different seminars on the communications of development through an Islamic approach.

Then, Dr Habibollah Azimi, a faculty member of the Organisation for Documents, commended the book and courage of Dr Rafie for composing this book. Afterwards, he dealt with the absence works on the topic of rationality and stated, “In Islam, rationality is regarded as a pivotal topic and there are several verses and narrative on this issue.”

The value of each person is assessed against the criterion of ration. In religious principles, rationality is a key issue, and this topic, if accompanied by the issue of communications and development, it could bear some better fruits.

Dr Nasiri, in another part of the session, said, “Immediately after the world war two, an abundance of theories was presented by the capitalist block on the topic of development, mostly providing descriptions, elaborations and introductions of development strategies/solutions for the third world countries; moreover, the science of development is a branch of social sciences having been expanded quickly and vastly maintaining all its initial paradigms.

However, the book is different from other works as it deals with the role of women, besides, in a systematic and orderly manner, it discusses four keywords of ‘Islam, development, communications and women’, and then presents a comprehensive map.

It can be said that the general and comprehensive theories are no longer useful in this area, and thus, it was the time we dealt with the sub-theories on the specific issues; the book draws a good conclusion and overall, it provides the reader with a complete picture.

I recommend the colleagues who are going to do research in the area of development to study this part of the book, as it provides some different and valuable materials on this topic.

Then, Dr Reza Khanipoor, with regard to the mourning days of Imam Hussain (AS), pointed to a narrative of this imam and said, “This narrative is not against the concept of development. Imam Hussain (AS) says that people’s demands of you are Heaven’s blessing granted to you, i.e., if a man asks you for something, it is God’s blessing bestowed upon you, and if his need is met by you, it brings you promotion/development.

The book has several advantages, and as Dr Shariati has mentioned, the just criticism is the one dealing with both positive and negative points. The topic of the book is a highly critical issue forming the philosophy of our existence and our temporary life in this world leading to perfection and development; moreover, the topic has been well worked on by the author. In my opinion, one of the main cores of this book, development in Islam, dealt with by the second chapter of the book, has been rarely worked on and it was required to be discussed so that a good result would be produced.

It is necessary to note that the book ‘The Part of Islam in Communications and Development with Emphasis on Women’s Communicative Role’, is a work, composed by Dr Rafie, the faculty member of the Organisation for Documents and the Iranian National Library, published by Simaye Sharq Publication, sold at 16000 Tooman.