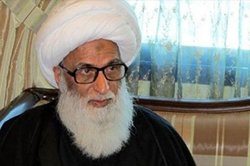 One of the sources of emulation of Najaf emphasized the need for the youth to adhere to ‎authentic Islamic culture.‎

According to Rasa News Agency’s correspondent in Najaf,‎‏ ‏Ayatollah Bashir al-Najafi ‎met with a group of university students who recently graduated from summer courses in ‎Iraq’s southern Dhi Qar governorate and said, “The youth must adhere to the thought and ‎path of the Ahl al-Bayt so that they can stalwartly rise up to defend pure Islam.”‎

The revered Najaf-based source of emulation noted, “These summer courses are in fact ‎sadaqah al-jariyyah (continuous charity) for its organizers and each of the youths is a ‎graduate of a set of sciences and lessons from the Ahl al-Bayt.”‎

Ayatollah al-Najafi called for the youth to be armed with the original Islamic culture in ‎opposition to any movement which stands against this divine religion and stated, “Atheistic ‎institutions and centres resort to various doubts to deceive the youth.”‎