Karbala is an extract of all of history 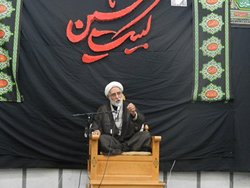 Hujjat al-Islam Maleki referred to the event of Karbala as an extract of all of history and ‎emphasized, “In every age and time, our mission must be to assist in the victory of Front of ‎Truth.” ‎

RNA – Speaking at a mourning ceremony at Qom’s Imam Sadiq Mosque, Hujjat al-Islam ‎Hamid Maleki, the assistant director of Edification and Education in the Islamic Seminaries, ‎explained the philosophy of human creation by referring the traditions and statements of ‎Allamah Martyr Mortaza Motahhari.‎

Referring to the Prophetic narration “one who truly knows himself has already come to know ‎his Lord,” the scholar emphasized that knowing oneself is an important principle and said, “A ‎noble, honourable and ardent man doesn’t commit sin, he doesn’t drunk alcohol, he doesn’t ‎lie and he doesn’t backbite.”‎
‎ ‎
Hujjat al-Islam Maleki considered one of the most important Quranic role models as the ‎loving personality of the Prophet Muhammad and emphasized that the Shi’ahs are the ‎people of the sunnah (tradition) and said, “We must take the Prophet Muhammad as a role ‎model and act in accordance with his advice, way of life, statements and deeds in our ‎personal and social lives.”‎
‎ ‎
His Eminence said that considering others as superior to ourselves as one of the levels and ‎signs of courtesy in Islamic teachings and added, “We must not be haughty over and ‎intoxicated by what God has given us. The true believer is the person who, if the whole ‎world is given to him or if the whole world is taken away from him, he doesn’t become ‎overwhelmed with joy or despair.”‎

In describing the characteristics of the believers, he cited traditions of the Infallibles and said, ‎‎“The believers don’t seek exaltation, supremacy and corruption on earth.”‎

In conclusion, Hujjat al-Islam Maleki referred to Karbala as an extract of all of history and ‎emphasized, “All of our efforts and our mission must be to identify and assist the Front of ‎Truth during every age and time. We must always know whether we are on the line of truth ‎or falsehood?”‎

Tags: Muharram Maleki Husayn
Short Link rasanews.ir/201sFg
Share
0
Please type in your comments in English.
The comments that contain insults or libel to individuals, ethnicities, or contradictions with the laws of the country and religious teachings will not be disclosed