The effect of forbidden food is very serious and important 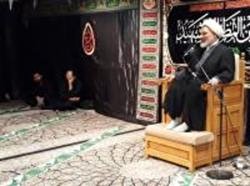 RNA – Speaking at a mourning ceremony at the Central of the Management of the Women’s ‎Seminaries, Hujjat al-Islam Abdolkarim Bahjatpour pointing out that the event of Ashura ‎contains many lessons and teachings and added, “We learned from the teachings of the Ahl ‎al-Bayt that Ashura is an opportunity to become acquainted with and to accompany the ‎culture of the Imams and the divine saints.”‎

The director of the Women’s Seminaries of Iran stated that on the Day of Ashura, two currents ‎confronted each other, one of absolute good and one of absolute evil and added, “When ‎Imam al-Husayn wanted to speak to the army of Yazid on the Day of Ashura, they made a ‎lot of noise and didn’t allow him to be heard. Imam Husayn gave a historical response, ‎saying, ‘Because your stomachs are filled with that which is forbidden and your hearts are ‎sealed, my words will not affect you.’”‎

Hujjat al-Islam Bahjatpour explained, “From the perspective of Imam al-Husayn, the ‎existence of forbidden property in the lives of these people made it such that God Almighty ‎even deprived them of the opportunity to hear the truth and to be guided.”‎

His Eminence emphasized that the effect of forbidden food is a very serious and important ‎issue, “The impact of property and food that eat and use during our lives affects our bodies ‎and also has a profound effect on our spiritual affairs. For this reason, it’s stated in the ‎traditions that worship has seventy parts and the most virtuous of them is seeking lawful ‎sustenance.” ‎

Hujjat al-Islam Bahjatpour added, “According to the religious teachings, if a person wants to ‎correct and deepen his relationship with God and even get to the point where his prayers are ‎answered, he must seek lawful sustenance.”‎

Tags: Bahjatpour Muharram Husayn
Short Link rasanews.ir/201sFe
Share
0
Please type in your comments in English.
The comments that contain insults or libel to individuals, ethnicities, or contradictions with the laws of the country and religious teachings will not be disclosed