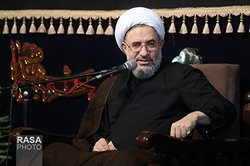 The secretary-general of the World Forum for the Approximation of Islamic Schools of ‎Thought stated that the most important duty of governments in the Islamic political system ‎is to build culture and said, “The government is responsible for the culture of society and ‎must be held accountable.”‎

RNA – Speaking at a mourning ceremony on the fourth night of Muharram at Shohada ‎Husayniyah in Qom, Ayatollah Mohsen Araki, the secretary-general of the World Forum for ‎the Approximation of Islamic Schools of Thought, said that culture forms the identity of ‎society and added, “The culture of the system encompasses the good and the bad of a ‎society.”‎

The member of the Assembly of Experts added, “In the language of jurisprudence and ‎religion, this system of good and evil is said to be ‘ma’ruf’ and ‘munkar.’ The greatest ‎assistance to any society is to assist to perform good actions and avoid the performance of ‎bad actions. The Imam is the wali (guardian) and nasir ‎‏)‏helper‏(‏‎ of society. The Imam is ‎responsible for showing mankind the way and guiding them along this path and assisting ‎mankind.”‎
‎ ‎
Ayatollah Araki said that the gatherings to remember the events which occurred on the Day ‎of Ashura are the identity of society and added, “All the events of Ashura, the martyrs and ‎the personalities of Karbala are creators of identity and builders of society which must be ‎taken into consideration.” ‎

His Eminence said that the most important duty of governments in the Islamic political ‎system is to build culture and stated, “Governments are responsible for the cultures of ‎societies and must be held accountable and today the Ministry of Culture and Islamic ‎Guidance has that responsibility.”‎

He added, “Those who have responsibility have to be held accountable for what coverage ‎and culture they have promoted in the society.”‎

Ayatollah Araki emphasized, “The government must consider that if there is a problem, ‎where it originated from. Governments and officials can instill a positive or negative culture in ‎society. The Master of the Martyrs [Imam al-Husayn] witnessed the danger of the change of ‎the culture of society and the alteration of good and bad and rose up which demonstrates ‎the importance of culture in society.”‎

Tags: Araki Husayn Muharram
Short Link rasanews.ir/201sEx
Share
0
Please type in your comments in English.
The comments that contain insults or libel to individuals, ethnicities, or contradictions with the laws of the country and religious teachings will not be disclosed