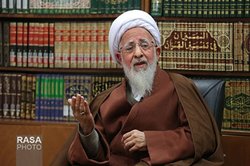 The revered source of emulation stated that we have a duty not to surrender to the arrogant ‎powers and said, “Iran has no intention to attack others and no one has the power to attack ‎Iran.”‎

RNA – In his weekly ethics lesson, Ayatollah Abdollah Javadi-Amoli referred to the arrival of ‎the solemn month of Muharram and mourning for the Master of the Martyrs [Imam al-‎Husayn] and historical continuity of the Karbala incident and stressed upon the historical ‎resilience and endurance of the tragedy of Karbala and said, “Although in appearance, the ‎event of Karbala was a minor accident in comparison with many other historical events and ‎crimes, when you read the contemporary history book ‘The History of the World Conqueror’ ‎‎[by Ata-Malek Juvayni 1226–1283] about the Mongol Horde, you see that the Mongols ‎perpetrated crimes and atrocities which were tens and hundreds of times greater than those ‎done in Karbala.”‎

The revered source of emulation continued, “But the names of the dead have been buried ‎but when Arba’in al-Husayn occurs,‎‏ ‏twenty million‏ ‏pilgrims march barefoot toward Karbala. ‎This is a celestial court – this is another account! Did Husayn ibn Ali fight for the world? He ‎fought for eternity – not for a year, a month, history, geography, sky nor earth – what he ‎fought for was above all if this.”‎

Ayatollah Javadi-Amoli added, “When you investigate the Umayyad movement before the ‎incident of Karbala, this movement – meaning Mu’awiyah, as well as his father Abu Sufyan – ‎were disbelievers until the conquering of Makkah and then they became hypocrites. There is ‎a luminous expression of Imam Ali wherein he said ‘[outwardly they became Muslims but] ‎they didn’t accept Islam but rather they surrendered out of fear.’ They stood against the ‎school of thought [of Imam Ali] in every sense, sometimes they put the Quran on the top ‎of spears, sometimes they accused the Quran of distortion, banned the writing of hadiths, ‎and their efforts led to plots such that hadiths were not narrated and they distributed prizes ‎on false occasions in order to buy people’s religion.”‎
‎ ‎
His Eminence emphasized, “When the movement of Karbala becomes clear and when our ‎duty is known is when we know to what extent the Umayyads were working. Now, to what ‎extent are the foreigners and arrogant powers trying to harm the Islamic system? The duty ‎of all of us is not to surrender due to this oppression because Imam al-Husayn said ‘Like ‎me, don’t surrender to this oppression.’”‎

He added, “This worthy country [Iran] has been suffering for a long time under pressure and ‎oppression and was oppressed. Now, due to divine blessings, it’s growing. It doesn’t ‎interfere in the affairs of others nor doesn’t it have any intention of attacking others and no ‎one has the power to attack Iran.”‎

Tags: Javadi Husayn Ashura
Short Link rasanews.ir/201sEj
Share
0
Please type in your comments in English.
The comments that contain insults or libel to individuals, ethnicities, or contradictions with the laws of the country and religious teachings will not be disclosed