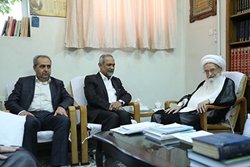 The revered source of emulation expressed hope that the current administration of President Hasan Rouhani would strive to serve the people and the country for the remaining two years of its term by increasing welfare and comfort.

RNA – In a meeting with Mohammad Nahavandian, the Vice President of Economic Affairs, and his delegation, Grand Ayatollah Lotfollah Safi-Golpaygani said that he hoped the current administration of President Hasan Rouhani would be able to do much more useful work for the country in the remaining two years of its term and said, “They can increase the welfare and ease of the people as well as serve the Muslim world and this will be a good and lasting asset for the government.”

The revered source of emulation said, “The noble people of Iran must not be in difficulty and discomfort. You must act in order to make them trust you and by seeing good works, welfare and ease, their attention and belief in religion will increase.”

Referring to beginning of the solemn month of Muharram, he emphasized, “This multi-day opportunity to serve has come and is a very important opportunity where you can gain the people’s trust in regard to religion and the Islamic system.”

Ayatollah Safi-Golpaygani said that the issue of hijab must be given greater attention and added, “Most of our noble people are committed to the laws of shari’ah and it’s important for them to follow the rules of the religion of Islam. Therefore, you must be careful and considerate in regard to this important matter.”

His Eminence further added, “Relations with other countries in which the protection of the dignity and integrity of the country and the Islamic system is very important, especially in regard to countries in the region and in the Islamic world, is necessary and essential.”

He emphasized the importance of serving the holy city of Qom and the pilgrims of Lady Fatimah al-Masumah and prayed for the success of the authorities and officials, for their service of Islam and the illuminated school of thought of the Ahl al-Bayt and for the welfare and comfort of the people and the removal of their worries.