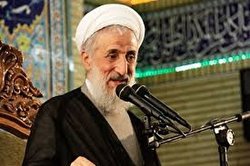 Ayatollah Kazem Seddiqi said that the cause of the current problems is due to not complying ‎with wilayah (guardianship) and added, “Wilayah is the only way to frustrate ‎the foreign ‎enemies and internal infiltrators.”‎

RNA – Speaking at a ceremony marking the auspicious occasion of Eid al-Ghadir in at ‎Tehran’s Ghadir Khomm Mosque, Ayatollah Kazem Seddiqi, the interim Friday prayer leader ‎of Tehran, said, “Eid al-Ghadir is the day of the salvation of the Quran and the divine religion ‎from distortion and destruction.”‎

His Eminence stressed that after the Prophet Muhammad’s death, God didn’t leave the ‎Islamic ummah without a wali (guardian) and Imam Ali was chosen as the wali of the ‎ummah and added, “‘Ali’ is one of the great names of God and is the manifestation of the ‎glory and beauty of the Lord.”‎

Noting that most of the verses of the Holy Quran speak about the enemies and friends of ‎Imam Ali, he said, “The truth and the hidden meaning of the Holy Quran is Imam Ali. Imam ‎Ali said, ‘I am the speaking Quran.’”‎

Ayatollah Seddiqi continued, “ibn Abbas [a companion of the Prophet and Imam Ali] is ‎quoted as saying that approximately 300 verses have been revealed in regard to the status ‎of Imam Ali, of which four verses clearly indicate his imamate and the caliphate from the ‎Prophet.” ‎

His Eminence emphasized that Ghadir is the reason for the life of mankind and said, “The ‎wilayah (guardianship) of Imam Ali is equal to the Holy Quran and the principle of ‎monotheism. The soul, spirit and consistency of religion are with the wilayah of Imam Ali.”‎

Pointing out that the animosity of the enemies toward us isn’t due to prayer and fasting but ‎their animosity is due to wilayah and said, “The existence of wilayah causes our enemies to ‎be despaired and frustrates them but wilayah is the hope of our friends because it’s this ‎wilayah that protects the existence of Muslims and gives them power from within and ‎provides the grounds for the enemies’ despair.”‎

Ayatollah Seddiqi added that the cause of the current problems is due to not complying ‎with ‎wilayah (guardianship) and added, “Wilayah is the only way to frustrate ‎the foreign ‎enemies ‎and internal infiltrators.”‎

He ‎emphasized that the Shi’ahs must be vigilant over the influence of the hypocrites and ‎said, “If the economy is suffering today, it’s not due to the supporters of wilayah but rather ‎the problems are caused by the influence of those who are opposed to wilayah.”‎