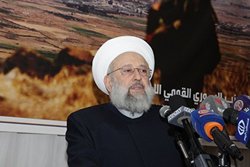 Shaykh Maher Hammoud called for a return to the language of logic and emphasized the ‎preference for Lebanese national interests over individual interests.‎

RNA – In his Friday prayer sermon in the southern Lebanese city of Sidon‎, Shaykh Maher ‎Hammoud, the chairman of the International Union of Resistance Scholars, criticized the ‎claim that the escalating tensions and psychological wars of the enemies that have closed ‎the minds and eyes of the people to the realities and said, “All parties to the conflict must ‎return to the language of logic and prefer genuine national and universal interests.”‎

The Lebanese Sunni cleric ‎also responded to the statement made by David M. Satterfield, ‎the United States Ambassador to Turkey and the Acting Assistant Secretary of State for Near ‎Eastern Affairs, that “if the Lebanese people are not satisfied with the Palestinian settlement, ‎we will work for the displacement of the Palestinians,” saying that in successive meetings ‎with Lebanese officials, all the American officials spoke in a threatening manner, especially in ‎regard to the issue of the demarcation of the land and sea border between Lebanon and the ‎Zionist entity in regard to extracting oil. ‎

He added that the issue of the employment Palestinians and the events surrounding this ‎issue resemble the sectarianism that existed in Lebanon before the 1975 to 1990 Lebanese ‎Civil War in which all Christians were on one side and all Muslims on the other side. ‎

Shaykh Hammoud warned of the repercussions of what is happening, especially as we hear ‎disturbing comments and added, “We are not satisfied that the government employees in ‎the country are 90 percent Muslim and 10 percent are Christian.” ‎