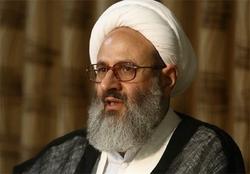 Ayatollah Faqihi has visited the ‎various sections of Rasa News Agency and listened to reports ‎on the activities of this seminary news agency‎. ‎

RNA – On August 3rd, Ayatollah Mohsen Faqihi, a member of the Society of Seminary ‎Teachers of Qom, visited the various sections of Rasa News Agency during the course of the ‎activities of this seminary media organization. ‎

His Eminence also visited the editorial office of Rasa News Agency and the office of Vasael.ir, ‎the Specialist Site of the Jurisprudence of Governance,‎ and praised the activities of these ‎seminary media organizations in both the domestic and international fields.‎
‎ ‎
During this meeting, the editor-in-chief and a number of the editors of Rasa News Agency ‎also presented reports on the activities of this news agency. ‎

Ayatollah Faqihi, who was born in 1952, is an Iranian source of emulation. He studied in the ‎Islamic Seminaries of Qom under Ayatollah Mortaza Haeri-Yazdi, Ayatollah Mohammad-Reza ‎Golpaygani and Ayatollah ‎Mohammad-Ali Araki. The Dars al-Kharij (graduate-level classes) ‎that he currently teachers in the fields of jurisprudence and its principles are among of the ‎most popular courses in the Islamic Seminaries of Qom.‎

He is also the head of the Dar al-Thaqalayn Wali al-Asr Institute. ‎

His Eminence is known for his book “Ma’rifat Abwab al-Fiqh” in which he summarized Imam ‎Khomeyni’s work “Tahrir al-Wasilah.” ‎