European States Not Fulfilling JCPOA Commitments, Coordinating with US 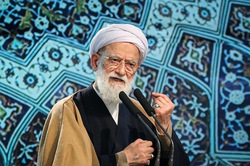 Tehran's provisional Friday Prayers Leader Ayatollah Mohammad Emami Kashani slammed the three European countries of Germany, France and the UK for not taking the needed measures to save the Joint Comprehensive Plan of Action (JCPOA) and also their compliance with the US.

RNA - Addressing a large and fervent congregation of the people in Tehran on Friday, Ayatollah Emami Kashani said, “Europe has failed its commitments; the three European states had promised to fulfill many things in various areas, including oil, banking transactions and other issues, but they have not done anything in any of these areas.”

The senior cleric, meantime, blamed the US for the ongoing crisis in the Middle East.

He underlined that the Iranian people and officials unanimously believe that Tehran should scale down its JCPOA obligations.

Washington withdrew from the internationally-endorsed 2015 nuclear deal with Iran on May 2018, re-imposed the toughest-ever sanctions against the country and started a plan to zero down Tehran's oil sales.

Yet, Iran continued compliance with deal, stressing that the remaining signatories to the agreement (specially the Europeans) had to work to offset the negative impacts of the US pullout for Iran if they want Tehran to remain in compliance. The Iranian officials had earlier warned that the European Union’s failure in providing the needed ground for Tehran to enjoy the economic benefits of the nuclear deal would exhaust the country's patience.

Then Iran gave Europe 60 days to either normalize economic ties with Iran or accept the modification of Tehran’s obligations under the agreement and implement the Europe's proposed INSTEX to facilitate trade with Iran.

According to Tasnim News Agancy, it was the 12th meeting of the Joint Commission on JCPOA in Vienna.

Borrell was quoted as saying that Spain was looking into the seizure of the ship and how it may affect Spanish sovereignty as it appears to have happened in Spanish waters.

Experts believe that the measure taken by the British government in seizing the Syria-bound Iranian tanker is illegal and can have serious consequences for the government in London.