Economic problems are the result of inattention to our internal capacities 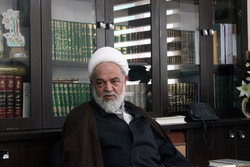 Rasa – Hujjat al-Islam Yaqoubi ‎said, “We have to accept that unfortunately we have been ‎neglectful regard to our economy, we have not ‎attempted to overcome our problems from ‎within but rather have looked outside our country and as a result, ‎we are now facing ‎troubles.”

RNA – Speaking during a meeting with a number of officials of North Khorasan province, ‎Hujjat al-Islam Abolqasem Yaqoubi, emphasized on the importance of the provincial officials’ ‎commitment to the implementation of the provisions of the statement on the Second Phase ‎of the Islamic Revolution and said, “This statement must be a lantern on the path and the ‎clinical book of our officials in different sections.”‎

The statement on the Second Phase of the Islamic Revolution ‎was issued by the Supreme ‎Leader of Iran’s Islamic Revolution, Ayatollah Sayyed Ali Khamenei to the country, ‎particularly to the youth, and was published on February 11th, 2019, the occasion of the ‎fortieth anniversary of the victory of the Iranian Revolution.‎

Referring to some of the shortcomings and economic problems in Iran, the representative of ‎the Supreme Leader ‎in North Khorasan ‎province‎ said, “The vacuum we feel at this time must ‎be filled with the message of the Supreme Leader in the statement on the Second Phase of ‎the Islamic Revolution because word-by-word, this statement speaks of these subjects and ‎can explain all of these statements.”‎

Hujjat al-Islam Yaqoubi said that which is explained in regard to the youth in this statement is ‎the essence of the youth and added, “The word ‘youth’ appears forty times is in the ‎statement, therefore, we must go that way because the young people are the capital of the ‎Islamic Revolution.”‎
‎ ‎
The Friday prayer leader of Bojnourd stated, “Of course, youthfulness doesn’t mean ageism. ‎We must make use of the experience of our predecessors and the energy of the youth.”‎
‎ ‎
He emphasized the need for further efforts to resolve the economic problems facing the ‎country and said, “This country has tremendous material and natural resources and we would ‎be better off if we had used them properly.”‎
‎ ‎
Hujjat al-Islam Yaqoubi noted that we must accept that the economy of our country is sick ‎and added, “We didn’t take the Resistance Economy seriously and now we have come to the ‎point where we are sometimes anxious about what we should do in the face of the United ‎States’ threats and sanctions.”‎
‎ ‎
In conclusion, he said, “We have to accept that unfortunately, we have been neglectful in ‎this regard, we have not attempted to overcome our problems from within and have looked ‎outward and as a result, we are now facing troubles.”‎