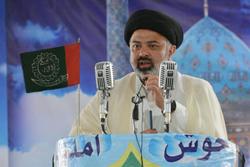 Rasa – Hujjat al-Islam al-Musawi al-Safawi ‎said that the House of Saud targeted Shi’ahs, ‎especially Shi’ah scholars, as part of a ‎planned conspiracy against the country’s Shi’ah ‎minority and a means to crush their dissent. ‎

RNA – Hujjat al-Islam Sayyed Muhammad-Hadi al-Musawi al-Safawi, ‎the president of ‎‎Anjuman-e ‎Shari’ Shi’ayan in Indian-occupied Jammu and Kashmir, ‎expressed his anger and ‎sadness over the execution of 37 Saudi citizens including Shi’ah scholar, Hujjat al-Islam ‎Muhammad Abdul-Ghani al-Attiyah, in Saudi Arabia, saying that the House of Saud targeted ‎Shi’ahs, especially Shi’ah scholars, as part of a planned conspiracy against the country’s ‎Shi’ah minority and a means to crush their dissent. ‎

The Kashmiri Shi’ah scholar ‎‎said that this is the biggest execution against the Shi’ahs in the ‎history of the House of Saud, in which 34 Shi’ahs and 3 others were beheaded “in connection ‎with terrorism crimes,” as a crackdown led by Crown Prince Muhammad ‎ibn Salman against ‎pro-democracy campaigners, human rights activists and intellectuals ‎widens in the kingdom.‎

He said that Amnesty International, a non-governmental organization focused on human ‎rights, has confirmed that Saudi Arabia convicted the majority of those convicted after sham ‎trials that violated international fair trial standards and relied on confessions extracted ‎through torture.‎

Hujjat al-Islam al-Musawi al-Safawi ‎said that this was the largest number of executions in a ‎single day in Saudi Arabia since January 2, 2016 when the kingdom executed 47 people for ‎terrorism-related crimes in what was the largest mass execution carried out by Saudi ‎authorities since 1980.‎

Among those executed three years ago were four Shi’ahs, including prominent cleric ‎Ayatollah Nimr Baqir al-Nimr‎, whose death sparked protests from Pakistan to Iran and the ‎ransacking of the Saudi Embassy in Tehran.‎
‎ ‎
His Eminence ‎said that the government of House of Saud has gained more influence among ‎Muslims and the Wahhabi forces have been able to continue to operate their plans. ‎

He ‎said that the oppression of House of Saud against innocent civilians in Yemen, Syria, ‎Syria, Lebanon, Iraq and elsewhere is proof of this. ‎

Hujjat al-Islam al-Musawi al-Safawi urged Muslims to respond to the enemies’ animosity by ‎strengthening the unity in their ranks.‎

Those executed hailed from Riyadh, Makkah, Madinah and Asir, as well as Shi’ah Muslim ‎populated areas of the Eastern Province and Qasim.‎

The executions also took place in those various regions.‎

It brings the number of people executed since the start of the year to around 100, according ‎to official announcements.‎

Last year, the kingdom executed 149 people, most of them drug smugglers convicted of ‎non-violent crimes, according to Amnesty’s most recent figures.‎