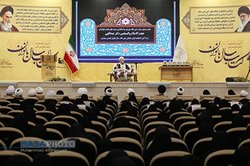 Rasa – The revered source of emulation said that on the Holy Quran, great importance has ‎been given to the pen and writing.‎

RNA – Speaking at the Women’s Book Conference held at the Islamic Awakening Hall at ‎Qom’s al-Zahra University, Grand Ayatollah Naser Makarem-Shirazi congratulated the ‎attendees on the birth anniversary of Lady Fatimah al-Zahra and considered the era of ‎human civilization as the beginning of writing.‎

The revered source of emulation said that the issue of the pen and writing is the creation of ‎human history and said, “In the Holy Quran, great importance has been given to the pen. ‎‎During the Era of Ignorance, in all of Makkah, the number of those who read and write was ‎not more than seventeen.”‎
‎ ‎
Ayatollah Makarem-Shirazi ‎added that an uneducated prophet rose up in such an ‎environment and the first verses that were revealed to him were about the pen and stressed, ‎‎“Some miracles of the Prophet of Islam aren’t well-known, including the scientific miracle ‎which occurred in such an environment which was distant from literacy and knowledge. This ‎isn’t natural.”‎
‎ ‎
Referring to the Prophet Muhammad’s habitual recommendation to his companions about ‎the need to record his sayings, His Eminence stated, “The Prophet predicted the events of ‎the current era wherein there is no access to a prophet and an infallible imam and the ‎people must refer to these narrations.”‎
‎ ‎
He said that Islam gives great importance the pen and explanation and said, “We use two ‎methods – the pen and explanation – to convey our knowledge and teachings and in this ‎case, the endurance of the pen is greater and the explanation ‎is also enduring through the ‎pen.”‎
‏ ‏
Ayatollah Makarem-Shirazi ‎congratulated the holding of the first Women’s Book Conference ‎and called it a “blessed action” but a “delayed action” and added, “We must appreciate this ‎and continue this path, the sending of six hundred works by women researchers and writers ‎to the secretariat of the conference is an importance issue.”‎