The Zionist regime is the enemy of Pakistan 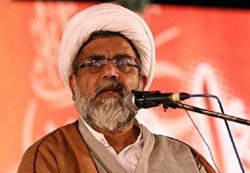 Rasa – Hujjat al-Islam Rajah Nasir Abbas Jafari said, “Placing hope in Israel is contrary to ‎Pakistan’s ideology and founders. The hostility of Israel ‎to the Muslims is not hidden for ‎anyone.”‎

RNA – Hujjat al-Islam Rajah Nasir Abbas Jafari, the secretary-general of the Pakistani Shi’ah ‎political organisation Majlis Wahdat-e-‎Muslimeen [Assembly of Muslim Unity], condemned ‎the recent statement made by former Pakistani president General Pervez Musharraf wherein ‎he claimed that Pakistan would be better off if it established relations with Israel, in order to ‎deal with the threats made by India, and said, “Placing hope in Israel is contrary to ‎Pakistan’s ideology and founders. Israel’s hostility toward Muslims is not hidden for anyone.”‎
‎ ‎
He added that General Musharraf still has the idea that he would be able to return to power ‎in Pakistan by satisfying the West, especially the United States.‎

Musharraf is a Pakistani politician and retired four-star army general who was the ten ‎President of Pakistan from 2001 until tendering his resignation, to avoid impeachment, in ‎‎2008.‎

During a press conference in Dubai on February 23rd, Musharraf hinted at establishing ‎relations with Israel to counter India. ‎

Mentioning his initiatives for establishing relations ‎with Israeli leadership with the help of ‎Turkey in 2005, the former army chief said that Israeli leadership had responded within 24 ‎hours of his offer for a meeting. He assumed that Israel wants to create better relations with ‎Pakistan.‎
‎ ‎
Hujjat al-Islam Jafari ‎called on former Pakistani officials and political figures to consider the ‎country’s national interests in their media statements and to avoid unrealistic statements ‎which are contrary to Pakistan’s ideology.‎
‎ ‎
His Eminence said that the Zionist regime plays a role in the crimes against the defenceless ‎people of Palestine and Muslims can never have friendly relations with this occupying regime.

‎“History has proven that friendship with this regime has not benefited anyone,” he said. ‎
‎ ‎
He noted that Israel has always been plotting against Muslims since the independence of ‎Pakistan.‎
‎ ‎
Hujjat al-Islam Jafari ‎noted that the Zionist occupation regime dreams of ruling over the ‎entire Middle East and unfortunately, some of the countries in the region are cooperating ‎with it.‎