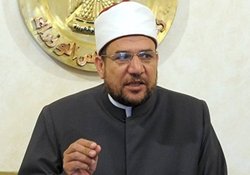 Rasa – Shaykh Muhammad-Mukhtar Jumu’ah‎ referred to the role of the approximation of the ‎heavenly religions and emphasized that the constructive engagement of the heavenly ‎religions provides the arena for the preservation of mosques and churches.‎

RNA – In the framework of the expansion of the culture of love, the peaceful coexistence of ‎heavenly religions and the strengthening of social solidarity, a conference entitled “Love, ‎Tolerance and Its Role in Building Societies” was held in the presence of Shaykh Muhammad-‎Mukhtar Jumu’ah, the Egyptian Minister of Endowments, in the country’s northern al-‎Sharqiyah Governorate.‎

At this conference, Egyptian religious and political figures, such as Shaykh ‎Jumu’ah‎ and Pope ‎Tawadros II, the Pope of the Coptic Orthodox Church of Alexandria, emphasized the need to ‎strengthen the convergence of denominations and heavenly religions.‎
‎ ‎
Shaykh Jumu’ah, the speaker of the conference, pointed to the formation of global ‎civilization, and stated, “Heavenly religions have been revealed to promote peace, ‎friendship, the promotion of peaceful coexistence, the promotion of religious toleration and ‎the spirit of national unity.”‎

The Egyptian Minister of Endowments added, “With the solidarity of religions, places of ‎worship, such as mosques and churches, will be protected from dangers. The strengthening ‎of the national spirit will lead to the further engagement of the managers of church and ‎mosques, while without the unity of the world, violence will be encountered.”‎
‎ ‎
He stressed the necessity of avoiding the occurrence of ethnic, religious and tribal strife and ‎added that the conflict between the heavenly religions would only lead to the destruction of ‎religion and shari’ah (religious law) because the use of language of force, threat and ‎destruction would not provide a way for the approximation of religions. ‎

At the end of his speech, Shaykh Jumu’ah referred to the meeting between Shaykh Ahmad ‎al-Tayyib, the Grand Imam of al-Azhar, and Pope Tawadros II and said, “The intersection of ‎humanity, in the light of the unprecedented interaction of the heavenly religions, has ‎provided a suitable platform for understanding the truth of religion and the teachings of the ‎heavenly religions.”‎

US church membership down sharply since 1999