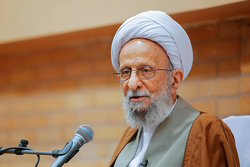 The head of Imam Khomeini Institute, saying that the Satan and enemy impose defeat and domination on the believers through division, stressed the unity against the single enemy.

RNA - The head of Imam Khomeini Institute, saying that the Satan and enemy impose defeat and domination on the believers through division, stressed the unity against the single enemy.

Ayatollah Muhammad Taqi Mesbah Yazdi, the head of Imam Khomeini Institute of Education and Research, in his class of ethics held in the office of the Sepreme leader of the Islamic Republic in Qom, expressing his condolence on Fatimia days, continued his last week discussion on Makarem al-Khlaq prayer and said, “To obtain the majority isn’t the authentic criterion for being the right.”

Saying that solely following the majority is not the authentic basis, as it is not a method of finding the reality, the faculty member of Qom seminary stated, “A rational principle mentions that the unlearned person had better refer to the learned scholar. Moreover, due to the said principle, the man ought to choose the expert or the physician who is of more expertise and experience.”

In another part of his words, he said, “The Satan and enemy well knows that the best way of defeating and achieving domination over the believers is to penetrate into them” and then added, “The enemy provokes division so that the forces are divided and their resistance is crumbled, and then domination over them is easily attained.”