The slogan of revolutionary people ‘Our movement is Husayni, our leader is ‎Khomeyni’‎ 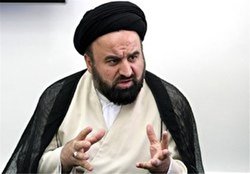 Rasa – Hujjat al-Islam Mirlouhi said, “The most important contributions of Imam Khomeyni’s ‎movement, which was accompanied by epic ‎eloquence and a passionate welcome by the ‎people, was in fact the slogan: ‘Our movement ‎is Husayni, our leader is Khomeyni‎.’”‎

RNA – In an exclusive interview with Rasa News Agency, Hujjat al-Islam Sayyed Mostafa ‎Mirlouhi expressed the conditions of the export of Iran’s Islamic Revolution, saying, “The ‎great Imam [Khomeyni] began the revolutionary movement on June 5, 1963, with his epic ‎speech on the day of Ashura at Qom’s Feyziyeh Seminary.”‎
‎ ‎
The teacher at Tehran’s Imam Sadiq University said that after his speech on that day, the ‎Imam was arrested by the Shah’s forces and the following day, the people of the cities of ‎Pishva, Varamin and Qom demonstrated their protest by going rushing to the streets to ‎defend Imam Khomeyni. ‎

Referring to the rise of independence and freedom-seekers in the countries of the region and ‎their Islamic Awakening, he stated, “After the Islamic Revolution, a phenomenon called the ‎‎‘Islamic Awakening’ has occurred in the countries of the Middle East, Asia, and even the ‎world, which is all due to the Islamic Revolution and the movement of Imam Khomeyni.”‎

Hujjat al-Islam Mirlouh stressed, “If the people didn’t say ‘Ya Zahra, Ya Husayn’ on the day ‎of the martyrdom of Lady Fatimah al-Zahra, the 22nd of Bahman would not have been a ‎covenant with the ideals of the Imam, the Revolution and the martyrs, and the country ‎would not have been insured against the arrogant powers.”‎