Terrorist groups brainwashing the people of the world

Rasa – Hujjat al-Islam Ghazi-Asgar said that today, terrorist groups are brainwashing the people of the world and we must be careful because if during the time of the Prophet Muhammad, the abuse of the companions did not occur, perhaps the tragedy of Ashura would not have happened. 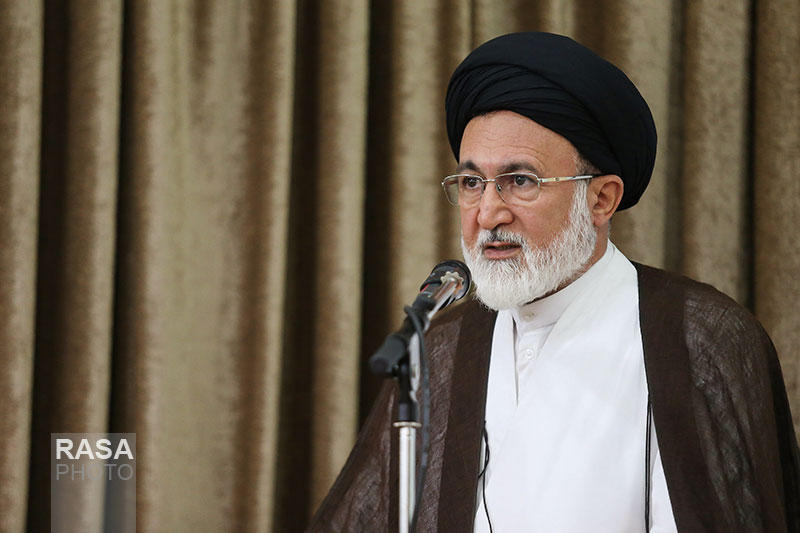 RNA – Speaking with a group managers and employees of the Judicial Organization of the Armed Forces on the occasion of the solemn month of Muharram in Tehran, Hujjat al-Islam Sayyed Ali Ghazi-Asgar, the representative of the Supreme Leader in Hajj and Pilgrimage Affairs, stressed that we must continue on the path of the Infallible Imams, saying: “We must completely understand the path of the Imams and follow it in order that our name is registered on the list of his companions.”

His Eminence said that the events that occur in the world are not accidental events and upon the basis that some predetermined programs occur, Ashura is one of the events that has specific importance in Islamic history.

“By contemplating a little over the past, a question arises – provided that the people of Madinah did not welcome Imam al-Husayn at the time of his arrival in the city and did not respect him then why did no one protest over the martyrdom of the Imam and the capture of his Holy Family or show any reaction? It is here that it must be said that some events were predetermined,” he said.

The Iranian cleric said that we must be careful because one of the factors contributing to the tragedy of Ashura was the greed and worldliness of the people of that time. When a person seeks the world, all of his faith is lost and he can no longer accept anything. This was the condition of the enemy forces on the day of Ashura.

He stressed that that the Iranian people must support the country’s Islamic system of government and national security and added that Iran is at peace due to the blessings of Islam but the people must be aware of their religious values and leaders, lest the enemy could infiltrate the nation due to the dissension among the people.

“Another factor for the tragedy of Ashura was the disregard for the wishes of the people and the unwillingness to solve their problems,” he said.

Hujjat al-Islam Ghazi-Asgar said that today, terrorist groups like Daesh are brainwashing the people of the world and we must be careful because if during the time of the Prophet Muhammad, the abuse of the elders and companions of the Prophet, such as Ammar ibn Yasir, Yasir ibn Amir, Abu Dharr al-Ghifari and Miqdad ibn Aswad did not occur, perhaps the tragedy of Ashura would not have happened.

Tags: Ghazi-Asgar Imam Husayn Ashura Muharram Husayn
Short Link rasanews.ir/201mM3
Share
0
Please type in your comments in English.
The comments that contain insults or libel to individuals, ethnicities, or contradictions with the laws of the country and religious teachings will not be disclosed