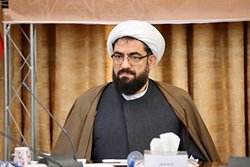 Hujjat al-Islam Sha’bani said, “The normalization of the United Arab Emirates’ political ‎relations with the occupying Israeli regime is unfortunate for all of us Muslims.” ‎

RNA – In his Friday prayer sermon delivered to a large and fervent crowd of believers ‎in Hamadan, Hujjat al-Islam Habibollah Sha’bani said, “The Beirut explosion publicly ‎showed that the enemies has many plans on the agenda to weaken the Islamic ‎Resistance Front and Hezbollah in Lebanon.”‎

The representative of the Supreme Leader of the Islamic Revolution in Hamadan ‎province said, “Although there is no documented evidence of the enemies’ involvement ‎in the Beirut incident, we need to analyze the events after this incident and know who ‎benefits in the meantime.”‎

He added, “In the discussion of the Beirut incident, we are faced with two issues, the ‎first issue is the issue of distortion of this incident and the second issue is sanctions, in ‎which the hostile and colonial countries are seeking to project.”‎

Hujjat al-Islam Sha’bani stated, “The Beirut explosion should be a lesson for us, we ‎should consider this incident as a warning signal for the Islamic ummah and increase ‎our insight and hostility.”‎

The teacher in the Islamic Seminaries added, “Today, the main need of the Islamic ‎world is unity, brotherhood and avoidance of differences.”‎

He said, “Among the Lebanese people, there are those who are happy with the United ‎States, France and other Western countries, which is a big mistake for them and for ‎Lebanon because any country that trusts the colonial powers will be the main loser.”‎

Hujjat al-Islam Sha’bani also referred to the normalization of relations between the ‎United Arab Emirates and the Zionist regime and said, “The normalization of the United ‎Arab Emirates’ political relations with the usurping regime of Israel, which has ‎committed all kinds of crimes against the Islamic world for more than seventy years, is ‎a pity for all of us Muslims.”‎

His Eminence stated, “Undoubtedly, this political act by the United Arab Emirates is ‎condemned by the Islamic countries and the Islamic Resistance movements and anti-‎Zionist groups.”‎

He said, “Fortunately, the situation in Hamadan has gone left the red level [high risk] in ‎regard to the Coronavirus, but again, people must be extremely careful about observing ‎hygienic standards, such as using a mask, and so on.”‎

Hujjat al-Islam Sha’bani pointed out, “We are on the eve of Muharram, we ask the ‎managers and trustees of religious delegations, eulogists, preachers and lecturers, etc. ‎to explain to the audience that the school of Imam al-Husayn is the school of rationality ‎and logic.”‎

Emphasizing that self-sacrifice means fighting oppression and having the spirit of ‎seeking justice, he added, “We should never have an emotional outlook when it comes ‎to holding Muharram ceremonies because it can be very costly for mourners and ‎believers in these special circumstances.”‎