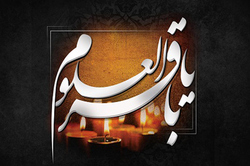 This article answers the question “What was the rank of Imam Muhammad al-Baqir in ‎respect to science and learning?‎”‎

What was the rank of Imam Muhammad al-Baqir in respect to science and learning?‎

He is famously known for analyzing and explaining various intellectual issues. He brought ‎about an extensive movement in learning and science, and laid the foundations for an ‎Islamic university, which reached its zenith in the time of his son Imam Sadiq.‎

Although he lived in unfavorable and restrictive times, Imam al-Baqir engaged in ‎disseminating the reality of Islam. He is famously known for analyzing and explaining various ‎intellectual issues. He brought about an extensive movement in learning and science, and laid ‎the foundations for an Islamic university, which reached its zenith in the time of his son ‎Imam al-Sadiq.‎

The scientific works of the 5th Imam and the students which his school delivered to the ‎Muslim nation also gave fulfilment to a prediction from the Prophet of Islam. The narrator of ‎the following tradition is Jabir ibn ‘Abdullah al-Ansari, the famous personality from the early ‎days of Islam’s revelation.‎

Jabir, who was one of the great companions of the Prophet of Islam. and one who ‎possessed a special affection for the family of the Prophet Muhammad. has written: One ‎day the Prophet of Islam said to me: ‘After me, you will see an individual who is from my ‎family, whose name is (the same as) my name, and whose appearance will be similar to ‎mine. He will open the doors of knowledge to the people.’‎

The Prophet foretold of this event at a time when Imam al-Baqir had not yet been born; ‎years passed from this foretelling, and the era of the 4th Imam arrived. One day during this ‎time period, Jabir was passing through the streets of Medina, when his eye fell on Imam al-‎Baqir. When he paid careful attention, he noticed all of the signs exactly which the Prophet ‎had mentioned. He asked: What is your name? The Imam replied: My name is Muhammad ‎ibn ‘Ali ibn al-Husayn. Jabir began to kiss his forehead and said: Your grandfather, the ‎Prophet sent you his greetings through me.‎

From that day on, in respect of the Prophet and as a sign of the greatness of Imam al-Baqir. ‎he would visit the Imam twice a day. In addition, when he was in the mosque of the ‎Prophet. he would sit amongst the crowd (and in response to those who would criticize him ‎with impure intentions) he would narrate the prediction of the Prophet of Islam.‎

Imam al-Baqir was also superior in his knowledge, asceticism, eminence, and virtue over all ‎of the rest of the Hashimis. The eminent status of his knowledge and actions were verified ‎by friend and foe alike. A great many traditions have remained from him in the fields of ‎Islamic rulings, commentary on the Quran, the history of Islam, and various other fields of ‎learning… The distinguished scholars of that day, along with a number of the companions of ‎the Prophet of Islam who were still alive at that time, benefitted greatly from the presence ‎of Imam al-Baqir.‎

Jabir ibn Yazid Ja’fari, Kaysan Sajistani (from the Tabi’in) and jurisprudents such as: ibn ‎Mubarak, Zuhri, Awza’i, Abu Hanifah, Malik, Shafi’i, and Ziyad ibn Mundhar Nahdi all benefited ‎from his knowledge and narrated his words both through intermediaries and without any ‎intermediaries. The books and compilations of scholars and historians of the Ahl al-Sunnah, ‎such as Ṭabari, Baladhuri, Salami, Khatib Baghdadi, Abu Na’im Isfahani, and books such as ‎Muwaṭṭa’ Malik, Sunan Abi Dawud, Masnad Abi Hanifah, Masnad Marwazi, Tafsir Naqqashi, ‎Tafsir Zamakhshari, as well as tens of others like them (which include some of the most ‎important books of the Ahl al-Sunnah), all contain the words of the 5th Imam. All throughout ‎these works, the words ‘Qala Muhammad ibn ‘Ali’ or ‘Qala Muhammad al-Baqir’ can be seen.‎

The books of the Shi’ah are also (naturally) full of the words and traditions of Imam al-Baqir ‎and these pertain to many various fields and subjects.‎

Imam al-Baqir According to the Scholars

The reputation of the knowledge and breadth of learning of Imam al-Baqir filled the various ‎corners of the Muslim nation to such an extent, that he was given the title ‘al-Baqir al-’Ulum’ ‎‎(The opener of the doors of knowledge, and the solver of the problems of science).‎

ibn Hijr al-Haytami has written: ‘MuHammad al-Baqir opened many hidden treasures of ‎science, learning, and religious law, as well as various wisdoms and subtleties. These are all ‎very apparent, except for someone who is lacking in intelligence or is of bad character. It is ‎for these aspects that he was called the splitter (of knowledge), the compository of learning, ‎and the flag bearer of learning.’‎

‎‘Abdullah ibn ‘Aṭa’, who was one of the prominent personalities and scholars during the time ‎of the Imam. has said: I never saw the scholars of Islam as being so lowly and humbled in ‎terms of their learning, as when they were in the gatherings of Muhammad ibn ‘Ali. I saw ‎Hakam ibn ‘Utaybah, who was known in all corners of the nation for his knowledge and ‎jurisprudence, in the service of Muhammad al-Baqir, like a child in front of his high ranking ‎teacher; he was on his knees, captivated and absorbed by the words and character (of the ‎Imam).‎

In his speeches, Imam al-Baqir would predominantly reference the verses of the Holy Quran, ‎and he would bring evidence from the Book of God. He would say: Whatever I say, ask me ‎where the related verse is found in the Quran, so that I may present it to you.‎

The Students of Imam al-Baqir’s School

Imam al-Baqir educated many prominent students in the fields of jurisprudence, tradition, ‎commentary, and various other Islamic sciences; each of these students was counted as a ‎heavyweight in respect to their learning and knowledge. Prominent personalities such as ‎Muhammad ibn Muslim, Zurarah ibn Ayn, Abu Basir, Burayd ibn Mu’awiyah Ajali, Jabir ibn ‎Yazid, Hamran ibn Ayn, and Hisham ibn Salim were all trained in the school of Imam al-Baqir.‎

The sixth Imam has mentioned: ‘Our school and the traditions of my father were kept alive ‎by four individuals. These four are: Zurarah, Abu Basir, Muhammad ibn Muslim, and Burayd ‎ibn Mu’awiyah ‘Ajali. If it were not for these four, no one would have benefitted from the ‎teachings of the religion and the school of thought of the Prophet. These individuals were the ‎preservers of the religion. From amongst the Shi’ahs of our time, these individuals were the ‎first who became acquainted with our teachings, and on the Day of Resurrection, they will be ‎joined with us sooner than the others.’ The students of Imam al-Baqir’s school were the ‎heads of jurisprudence and tradition during their time, and they were considered superior to ‎their non-Shi’ah counterparts.‎