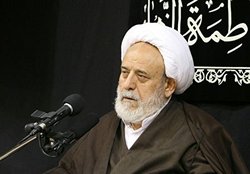 RNA – Speaking at an academic conference entitled “Coronavirus and the Challenges Facing ‎the Religious Delegations” held at the library of Ayatollah Haeri-Tabasi in Qom, Hujjat al-‎Islam Hoseyn Ansarian, a prominent teacher in the Islamic Seminaries of Qom, referred to ‎the fact that non-Muslims have acknowledged that one of the excellencies of Islam and ‎Shi’ism is spontaneous religious gatherings and said, “The only government that has been ‎spending heavily on its administration for 1,400 years is the government of Aba Abdillah al-‎Husayn.”‎

His Eminence continued by stating that the lovers of the school of Imam al-Husayn spend ‎with generosity in the path of Aba Abdillah and said, “The employees of the Husayni ‎government spent for their government. The lovers of Aba Abdillah spend billions of tomans ‎of money on this path annually and we are sure that it will be spent properly.”‎

He noted that according to the narrations, the flag of the mourning gatherings for Aba ‎Abdillah will be raised until the Day of Resurrection and added, “The enemies have made ‎many attempts to extinguish this light but they haven’t succeeded and will never succeed.”

Hujjat al-Islam Ansarian pointed to the greatness of the gatherings of Imam al-Husayn in the ‎mirror of narrations and said, “We have to plan for the days of mourning and bring it to the ‎peak of benefit and strive for gatherings and gatherings and crying over them.”‎

Saying that we should observe hygiene and hold mourning sessions, His Eminence said, “In ‎the narrations, it’s narrated from Ahl al-Bayt ‘whoever speaks our words or‏ ‏our words are ‎spoken to him and cries as much as a fly’s wings, all his sins will be forgiven.’”‎

He pointed out, “During the Laylat al-Qadr (Night of Power) gatherings, we held gatherings ‎while social distancing inside and outside the husayniyah, and there was not even a single ‎report of a single participant being diagnosed with the Coronavirus.”‎

Hujjat al-Islam Ansarian added that all religious principles are due to the movement of Imam ‎al-Husayn and said, “Let us come to the gatherings in good health and not be afraid because ‎these gatherings guarantee the continuity of the religion, good deeds, the Islamic Seminaries ‎and the religious authorities.”‎

He reminded, “We should not misinterpret the statements of the Supreme Leader of the ‎Islamic Revolution [Ayatollah Khamenei] because I’m aware that he said that despite the ‎current situation this year, we must hold the Muharram mourning gatherings as passionately ‎as possible by observing the necessary protocols.” ‎