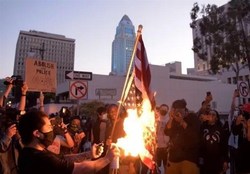 The Strategic Council of the International Servants of Mahdism has issued a statement in ‎which they condemned the centuries-long crimes against African-Africans in the United States. ‎

RNA – The Strategic Council of the International Servants of Mahdism, which is affiliated with ‎the Centre for Justice at the Holy Mosque of Jamkaran, has released the following statement ‎in condemnation of the crimes against African-Africans in the United States. ‎

The present protests in the United States began when George Floyd, a 46-year-old African-‎American man, was killed in Minneapolis, Minnesota on May 25, 2020, after allegedly using a ‎counterfeit $20 bill at a market. ‎

While Floyd was handcuffed and lying face down on a city street during an arrest, Derek ‎Chauvin, a white the American Minneapolis police officer, kept his knee on the right side of ‎Floyd’s neck for 8 minutes and 46 seconds. According to the criminal complaint against ‎Chauvin, 2 minutes and 53 seconds of that time occurred after Floyd became unresponsive.‎

After Floyd’s death, demonstrations and protests in the Minneapolis-Saint Paul area were ‎initially peaceful on May 26, and later that day became violent as a police precinct and two ‎stores were set on fire, and many stores were looted and damaged. Some demonstrators ‎skirmished with police, who fired tear gas and rubber bullets. Additional protests developed ‎in over 200 cities throughout all 50 states in the United States as well as internationally.‎

The statement of the Strategic Council of the International Servants of Mahdism is as ‎follows:‎

The establishment of world peace and security and the establishment of fairness and justice ‎has been the ideal and lofty goal of the great prophets from Adam to the Seal of the ‎Prophets, Muhammad, as is stated in the Holy Quran (“so that mankind may maintain ‎justice” [Quran 57:25]) and is based on the definite divine promise (“Indeed My righteous ‎servants shall inherit the earth” [Quran 21:105]). The Seal of the Vicegerents and the ‎Promised One, Imam Muhammad al-Mahdi, will bring this to realization with the help of the ‎justice seekers of the world and Jesus Christ.‎

The widespread protests and crises that we are currently witnessing throughout the fifty ‎states of the United States are the reaction to the tyranny, racism and injustice of the ‎leaders who have claimed freedom, democracy and human rights over the centuries ‎concerning the African-Americans and the people of this country.‎

The American government’s brutal and violent treatment of the people is a clear example of ‎the confrontation between the oppressors and the oppressed, who can no longer tolerate all ‎this humiliation.‎

If this widespread uprising, which has spread to Europe and other parts of the world, is ‎suppressed by coercion and violence at the present time, it will undoubtedly turn into a fire ‎under the ashes that will be ready to ignite and uproot the foundations of oppression and ‎tyranny at any time.‎

The Strategic Council of the International Servants of Mahdism, which is affiliated with the ‎Centre for Justice at the Holy Mosque of Jamkaran, is inspired by the Quranic teachings, the ‎school of Imam Khomeyni and the pure ideas of Imam Khamenei and states that the crimes ‎of the Great Satan [the United States] are against the protesters who want their basic rights, ‎including security, to be respected. ‎

We strongly condemn the brutal repression of the demonstrators and call on all free ‎thinkers, seekers of justice, thinkers and lovers of peace and humanity, regardless of colour, ‎language, religion, tribe, ethnicity, race or nationality.‎

We condemn the actions against human rights by the dictatorial rule of the “Mother of ‎Corruption of the Century” and support the oppressed people of the United States, ‎especially the African-Americans.‎

We make this statement in the hope that this popular uprising will pave the way for a global ‎awakening and revolt against oppression around the world and pave the way for the ‎emergence of the only saviour of mankind in the world.‎

With hope for the ultimate victory of righteousness over falsehood throughout the world,‎

The Strategic Council of the International Servants of Mahdism ‎