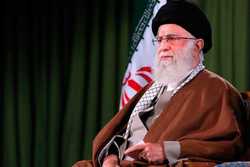 The Supreme Leader lashed out at the UAE regime after an Etihad Airways cargo plane ‎coming from Abu Dhabi landed at Ben Gurion airport in the “Israeli”-occupied ‎territories.‎

RNA – The Supreme Leader of the Islamic Revolution, Ayatollah Sayyed Ali Khamenei, ‎lashed out at the United Arab Emirates’ regime after an Etihad Airways cargo plane ‎coming from Abu Dhabi landed at Ben Gurion airport in the “Israeli”-occupied ‎territories.‎

‎“Today, some Persian Gulf states have committed the biggest treachery against their ‎own history and the history of the Arab world. They have betrayed #Palestine by ‎supporting Israel. Will the nations of these states tolerate their leaders’ betrayal?”‎

This comes in response to the latest move in particular, but also includes accumulated ‎acts of normalization from different Arab states that have been shamelessly warming up ‎ties with the murderer of Gazan children and the occupier of Palestinian lands.‎

For the first time ever, the cargo plane landed at Ben Gurion airport in Tel Aviv, although ‎the “Israeli” entity and the UAE don’t have diplomatic relations or direct flights.‎

In recent years, however, the UAE and the Zionist entity have been normalizing ties and ‎have engaged in extensive unofficial cooperation based on their joint opposition to Iran’s ‎nuclear program.‎

The Etihad Airways plane, allegedly carrying humanitarian assistance to the Palestinian ‎Authority and Gaza, mainly equipment for the coronavirus crisis, didn’t bear the ‎company’s logo on its body.‎