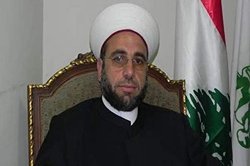 Shaykh Dr. Maher Abdul-Razzaq said, “The normalization of relations with the Zionist ‎regime has become a proof of the betrayal of the Arab rulers to the Islamic ummah and ‎their mercenary document [the Deal of the Century].”‎

RNA – An Arabic-language video conference was held entitled “Institutionalizing the ‎Normalization of Relations: The Insistence of the Arab Rulers and the Opposition of the ‎Nations” at the headquarters of Rasa News Agency in Qom.‎

Prominent figures from the Arab world, such as Dr. Ahmad al-Sa’adi, the director of the ‎Islamic and Strategic Research Centre of Martyr Fadhil from Iraq, Professor Abdul-‎Ghani al-Khanjar, the representative of the Haqq Movement for Liberty and Democracy ‎in Bahrain, and Shaykh Dr. Maher Abdul-Razzaq, the head of the Sunni Reform and ‎Unity Party, participated in the webinar. They examined important issues, including the ‎normalization of relations between some Arab countries through the production of ‎Ramadhan serials on the subject of institutionalizing normalization with the Zionist ‎occupying regime.‎

Shaykh Abdul-Razzaq said, “International al-Quds Day has proved that the issue of the ‎holy city of al-Quds (Jerusalem) will always remain in the memory of the Islamic ummah ‎and its liberation is at the forefront of Muslims’ priorities.”‎

The Lebanese Sunni scholar continued: “The Zionist regime and its regional followers ‎will never be able to erase Palestine from the memory of Muslims, and we declare to ‎the United States, the Zionist regime and all their colonialist-minded people that our ‎struggle for the liberation of al-Quds continues and the efforts of some Arab regimes to ‎stop this battle are futile.”‎

He added, “The Islamic ummah thwarted all the conspiracies of the recent decades ‎against Palestine and the holy city of al-Quds, and we Muslims, as a united nation and ‎the cohesive Islamic Resistance Axis, will thwart other conspiracies.”‎

Shaykh Abdul-Razzaq explained, “The normalization of relations with the Zionist regime ‎by the Arab rulers has now become a document for mercenaries and a proof of their ‎betrayal of the Islamic ummah, but Muslim nations have never agreed with them and ‎have always stood by the resistance to defend Islamic sanctities.”‎

It is worth mentioning that many Arab countries lost their reputation among the ‎Islamic ummah after the Deal of the Century and were doomed to normalize relations ‎with the Zionist regime. Now they have taken two approaches, either appearing to be ‎pro-Palestinian or openly exposing their hidden ties to Tel Aviv and severely repressing ‎the opposition. This is what Saudi Arabia, Bahrain and the United Arab Emirates are ‎currently doing. ‎

Iran Standing behind Gates of Quds