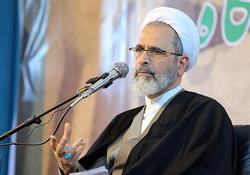 The head of the Islamic Seminaries of Iran said, “The issue of awaiting and the saviour and end times have been fully raised in a glorious manner in all Islamic sects and schools of thought.”

The head of the Islamic Seminaries of Iran referred to the present situation of society and the prevalence of COVID-19 (Coronavirus) and expressed hope that this tribulation will be removed from the world, especially the Islamic world and the Islamic Iranian society, thanks to the blessed birth anniversary of the Imam on this night.

He said, “Because of this tribulation, we aren’t seeing the widespread and affectionate presence of the lovers, this is a sorrow for us but in addition to these sorrows, our great sorrow is due to the absence of Imam al-Mahdi and our distance from his presence. We hope that this sorrow will be removed with the pure prayers and supplications of the righteous believers and that the world will see the light and radiant of the Imam.”

Ayatollah Arafi also said a few things about the expectations and duties of those awaiting the return of Imam al-Mahdi and said, “The issue of Mahdism and waiting is a deep-rooted issue in human thought in all human schools of thought, divine religions, Islamic sects and schools of thought, especially in the school of the Ahl al-Bayt.”

The member of the Supreme Council of the Islamic Seminaries added, “Our youth must know that the issue of Mahdism and awaiting is a deep-rooted issue. In our teachings, this issue has these five sections. Mahdism is a human thought and awaiting a healthy and clean society purified from all evils is awaiting a flourishing season away from mistakes and deviations which is a wish and expectation that has existed in human thought throughout history.”

He added, “This idea is more specifically focused on in the Abrahamic religions, and that they share the category of Mahdism with Islam. The issue of awaiting and the saviour and end times have been fully raised in a glorious manner in all Islamic sects and schools of thought and narrations on this issue have been expressed.”

Ayatollah Arafi said, “What is stated in our religious texts is very different from what we have stated in previous sections. The issue of Imam al-Mahdi and his reappearance and the plan for which the Mahdist society, the flourishment and spirituality have been outlined aren’t specific to the Shi’ahs. The Sunnis and other Islamic other schools of thought have a consensus on the issue of waiting.”