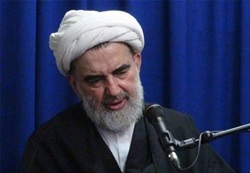 Ayatollah Javedan stated that the fear of tribulation is more dangerous than Coronavirus and said, “These calamities will be eliminated by prayer and reliance on God.”

RNA – In an ethics class broadcast online, Ayatollah Ali Javedan, a teacher in the Islamic Seminaries, referred to the spread of COVID-19 (Coronavirus) in Iran and said, “The fear of tribulation is more dangerous than Coronavirus.”

Ayatollah Javedan referred to the famine and cholera outbreak in Iran during the reign of Reza Khan [1925-1941] and said, “During that time, in addition to these tribulations, scholars were exiled and imprisoned and people were under great pressure because of the presence of the traitorous British in the country.”

Referring to the verses of the Holy Quran, His Eminence stated, “According to the divine teachings in the Holy Quran, if the People of the Book believe and have piety and follow the divine laws, God will forgive, compensate and cover their past sins. He will allow them to enter into the felicity of heaven in the Hereafter and bestow His blessings on them in the world from the heavens.”

He added, “If most people adhered to divine laws, tribulations wouldn’t have befallen them. At the beginning of the Islamic Revolution, the hearts of the people tended to God and the Ahl al-Bayt and most of them were those who resorted to God and relied on Him, which is why we witnessed many blessings at that time.”

Ayatollah Javedan continued, “Today, if most people have compassion and love for each other and supplicate and pray to God, God will be kind to them and will save them from the critical circumstances of the Coronavirus.”

In conclusion, he emphasized out the importance of supplications and prayers in the month of Sha’ban and noted, “During these days, which are dear to God, we supplicate to God to forgive our sins and return good health to all our fellow citizens and to the people of the world.”