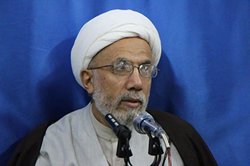 RNA – In an exclusive interview with Rasa News Agency, Hujjat al-Islam Naser Shokrian, the director general of Islamic Development Organization of Mazandaran province, said, “For forty years the United States and its leaders have been opposing the very nature of the Islamic Republic and openly committing crimes against the resistant and heroic nation of Iran.”

The teacher in the Islamic Seminary of Mazandaran said that an example of their brutal crimes can be clearly seen in the assassination of the honourable and respected martyred commander of the Islamic Republic of Iran, Major General Qasem Soleymani and his comrades at Baghdad International Airport and added, “The great Iranian people will never forget the atrocities of the vicious American regime.”

Hujjat al-Islam Shokrian described the statements of the American officials in regard to offering medical assistance to Iran as “shameful” and said, “The ridiculous and foolish president of the United States and some of the terrorist-training officials in this country are apparently unaware of the situation in their country and are promoting the gesture of aid to Iran and the world in public opinion but they must first try to rid their country of the mess they are in and then shout their claims of human rights.”

In another part of his speech, he referred to the Norouz message of the Supreme Leader of the Islamic Republic, Ayatollah Sayyed Ali Khamenei, and said, “The Islamic Republic has been facing all sorts of crimes and sabotage from the United States for the past forty years and will certainly not forget the arrogance and criminal behaviour of the American leaders.”

He emphasized the national resolve and lofty efforts of medical staff and healthcare professionals of the country noted against COVID-19 (Coronavirus) and said, “Today, the path of fighting in the country is on the front lines of the health front of the Islamic system.”

Hujjat al-Islam Shokrian stated that despite the cruel sanctions and sabotage by the enemies of the system and the Iranian people, the medical staff and healthcare professionals are resisting through unyielding sacrifice and effort on the frontlines.

US scaring off humanitarian aid to Iran, analyst says