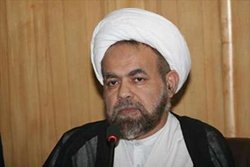 Hujjat al-Islam Kalantari said that knowledge and rationality are within the geometry of religious knowledge and added, “The enemies, who have been hit hard by religion, spirituality and the clergy seek to weaken religion.”

RNA – In an exclusive interview with Rasa News Agency, Hujjat al-Islam Ali-Akbar Kalantari, the representative of the people of Fars province in the Assembly of Experts, referred to the importance of health in the religion of Islam and said, “Divine religions, especially Islam, the Quran and the tradition of the Infallibles are all important. They emphasize health, well-being and vitality which are all highlighted in religious teachings and called on the people to refer to a physician when needed.”

Stressing that the enemies seek to undermine the valuable and popular base of the Islamic Seminaries of Qom, he said, “It’s clear that our enemies and those who have abused, humiliated and criticized Islam, spirituality and Qom have been dealt many blows and humiliated and have been criticized by religious people, are seeking to take revenge and undermine this valuable popular and spiritual base.”

Hujjat al-Islam Kalantari stated, “In recent times, the enemies have sought to create a contrast between religion, spirituality and health, while it is clear that knowledge, expertise and attention to technology and scientific advancements in religious teachings are of interest.”

His Eminence referred to the divine examinations as increasing the rank of the servants of God and said, “It’s only natural that God Almighty will test and afflict His servants at some point until they are made believers and come out of neglect, forgetfulness and inattention and work to strengthen their connection with God Almighty and the patience of the servants will be examined.”

He pointed to the enemies’ attempts to make the people abandon the religion and said, “Given the recent events, the enemies have sought to undermine the importance and position of religion in the minds of the people and distance them from religion, especially those who have no religious consciousness.”

Hujjat al-Islam Kalantari cited the recent remarks of the Supreme Leader of the Islamic Revolution, Ayatollah Khamenei and said, “The Supreme Leader came to this point and referring to the observance of hygiene, health, referral to health places, the encouragement and praise of health-care assistants and medical staff and also emphasized prayer and supplication to God.”