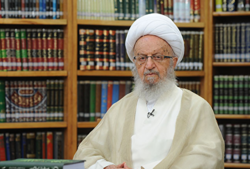 The revered source of emulation praised the scholarly efforts of the late scholar, Hujjat al-Islam Khosroshahi in a statement released.

RNA – Grand Ayatollah Naser Makarem-Shirazi issued a message of condolences on the death of Hujjat al-Islam Sayyed Hadi Khosroshahi, who passed away on February 27th from COVID-19 (Coronavirus). He was 81 years of age.

The Islamic Republic of Iran’s first ambassador to the Holy See, His Eminence was a prominent figure in Iran’s holy city of Qom. He was transferred to a hospital in Tehran on February 26th where he tested positive for Coronavirus. He passed away the next day of respiratory complications.

After two years serving as the representative of the founder of the nascent Islamic Republic, Imam Ruhollah Khomeyni, in the Ministry of Culture and Islamic Guidance, Hujjat al-Islam Khosroshahi was appointed as Tehran’s ambassador to the Vatican. He was the first Shi’ah cleric serving representing the Islamic Republic at the Vatican.

The text of the message of this source of emulation was made available to Rasa News Agency is as follows:

The sad news of the death of the powerful writer and eminent scholar, Hujjat al-Islam Haj Sayyed Hadi Khosroshahi (may God’s mercy be upon him) is of deep lament.

Throughout his life, this powerful author and defender of the world of Islam and Shi’ism has accomplished many acts of service through his written works and many books have been made available to the general population through him. That his personal library was dedicated to the use of everyone, especially the seminarians and virtuous people of the Pardisan neighbourhood of Qom is another example of the acts of service of this late blessed scholar.

May God rest his soul with the souls of his ancestors and grant his surviving family great reward and patience.