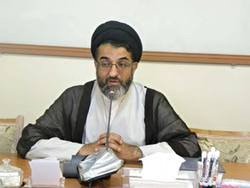 Hujjat al-Islam Mousavinasab said that Imam Khomeyni’s Charter of the Clergy emphasizes the presence of jurisprudence and jurisprudents in the field of politics and management and said, “The late Imam explained the position of true clergy in this charter.”

RNA – In an exclusive interview with Rasa News Agency, Hujjat al-Islam Sayyed Mohammad-Reza Mousavinasab-Kermani, a member of the Imam Khomeyni Educational and Research Institute, referred to a speech by the Prophet Muhammad and said, “He said, ‘the outwardly ignorant and the scholars who disregard the religion have broken me.’ If we review the history of the issuance of the message of the late Imam Khomeyni known as the ‘Charter of the Clergy’ issued on February 22, 1989, it was written at a time when some of the attributes of the Islamic Revolution and of the revolutionary personalities had been caught up in a sharp deviation and comments against the Islamic Revolution and the movements of the Islamic Revolution.”

The seminary and university teacher, “After the Imposed War [Iran-Iraq War] and in opposition to the adoption of [United Nations Security Council] Resolution 598 they said that we had fought for eight years and had to be held accountable for the blood shed because we didn’t achieve any result. Given the fact that this statement came from the tongue of reactionary and Westoxified intellectuals, Imam Khomeyni insisted in the charter that the clergy must act in regard to the issues in a reactionary manner and must not fall into the trap of those who seem to be good-natured and have submitted to those with liberal thinking.”

Hujjat al-Islam Mousavinasab stated, “In the ‘Charter of the Clergy,’ the late Imam Khomeyni makes the scholars of society realize that the authentic Islamic scholars are those who haven’t fallen under the burden of capitalists and oligarch. Basically, those are opposed to clerics aren’t opposed to those clerics who propagate American Islam but rather they are opposed to revolutionary, patient, ascetic and religious clerics who defend religion and religious values.”

In another part of his remarks, His Eminence said, “In opposition to those who promoted the thought ‘why do we chant the slogans of ‘death to America’ and ‘neither East nor West?’’ Imam Khomeyni said we don’t depend on anyone because we had a duty and we didn’t fail to do it and we were able to achieve the desired result.”

He noted, “What the enemies fear is that through our Islamic jurisprudence and principles, we want to take over the management of society and that we want religion to manage our economy.”

Hujjat al-Islam Mousavinasab further stated, “We hope that the Islamic Seminaries will put this charter as a cornerstone of the teachings of the students and won’t neglect its contents because it shows the path of the clergy as a bright light and determines our duty.”

Tags: Mousavinasab Charter of the Clergy Clerics
Short Link rasanews.ir/201srY
Share
2
Please type in your comments in English.
The comments that contain insults or libel to individuals, ethnicities, or contradictions with the laws of the country and religious teachings will not be disclosed