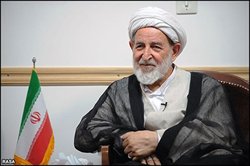 Ayatollah Yazdi invited the Iranian people to participate in the upcoming legislative election in a passionate manner and said, “With their passionate participation in the election, the people will disappoint the enemies and strengthen the Islamic system.”

RNA – Ayatollah Mohammad Yazdi, the head of the Society of Seminary Teachers of Qom, referred to the February 21st legislative election in Iran and said, “We need to be aware of the situation and conditions of the present time and focus on the situation throughout the country and the security and successes of the Islamic Revolution.”

His Eminence added, “Today we are facing special conditions and we need to be present on the scene in a serious manner. My advice to the dear people, as a seminarian and as a person familiar with the conditions and situation in the country, is that everybody in the country with every thought, belief and opinion must be present at the ballot box.”

The senior Iranian cleric added, “The people must to go to the ballot box and vote for whoever they want. Of course, people must look for more competent people. Their very participation at the ballot box plays a role in supporting and affirming the sovereignty of the country.”

Tags: Yazdi Election Iran Society of Seminary Teachers
Short Link rasanews.ir/201sq0
Share
2
Please type in your comments in English.
The comments that contain insults or libel to individuals, ethnicities, or contradictions with the laws of the country and religious teachings will not be disclosed