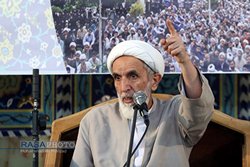 RNA – Speaking in one of a series of lectures on ethics held at Kashan’s Salman-e Farsi Mosque, Hujjat al-Islam Mahdi Taeb referred to the command of the Supreme Leader of the Islamic Revolution [Ayatollah Khamenei] wherein he said that the price of Haj Qasem Soleymani’s blood is the expulsion of the United States from the Middle East and said, “The Supreme Leader said that the United States must leave the region because, according to the command of the late Imam Khomeyni, the United States is the ‘Great Satan’ and is our enemy and in order for Imam al-Mahdi to reappear, the enemies must be expelled from the Arabian peninsula and the region.”

The head of the Ammar Camp continued to emphasize the importance of the presence of all those who are eligible to vote in the February 21st legislative elections in order to have a powerful Islamic Consultative Assembly [parliament] on the international stage and said, “Today we need a parliament that can expel the United States from the region.”

Hujjat al-Islam Taeb continued, “In announcing his distinctions, the Supreme Leader emphasized two important points: the Islamic Consultative Assembly must have dignity and authority on the international stage and the dignity and authority of the Islamic Consultative Assembly depends on the participation of all those who eligible to vote in the elections.”

His Eminence emphasized that Haj Qasem Soleymani’s sincerity and determination are among his distinctions as announced by the Supreme Leader and stated, “One of the distinctions of the worthiest representative is to be active and not to be afraid of the enemies.”

He called on all groups and factions to avoid dissension and division and to unite and stand together in the forthcoming legislative election with the strongest and most powerful manner and with the greatest participation.

Hujjat al-Islam Taeb said, “When you go to the polls, encourage others to go to the polls because if you bring one person with you, the reward is greater than a hundred years of night prayer.”

Tags: Mahdi Taeb Taeb USA Elections Parliament
Short Link rasanews.ir/201spX
Share
2
Please type in your comments in English.
The comments that contain insults or libel to individuals, ethnicities, or contradictions with the laws of the country and religious teachings will not be disclosed