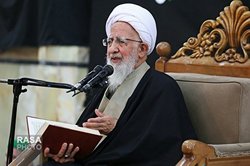 Ayatollah Javadi-Amoli, in appreciation of the epic creation by the Iranian people in the 22 Bahman rallies and emphasized that we must thank God for the great blessings of the Islamic Revolution.

RNA – Speaking during his dars al-kharij (post-graduate) lesson, Ayatollah Abdollah Javadi-Amoli, praised the creation of an epic by the Iranian people in the 22 Bahman [11 February] rallies and said, “We must thank God for allowing us to participate in the rallies and to fulfill our duty to protect the blood of the martyrs.”

The prominent teacher in the Islamic Seminary of Qom added, “God bless the Imam [Khomeyni] and we hope that anyone who has done any service in the Islamic system will be accepted by God and whoever is deficient and idle, we pray that God will guide and guide them.”

Ayatollah Javadi-Amoli added, “Thanks be to God; we have everything in the country and we must be thankful to God for the great blessings of the Islamic Revolution and to know that such unity we saw yesterday isn’t possible except for divine grace.”

His Eminence said, “It’s divine grace that anyone in the intense cold and snow with a woman and a child would come to the scene to help religion. We must thank God and pray for those who are asleep and if they don’t awaken, God will punish them.”

He added, “The officials must know that the same punishments will about be asked on the Day of Resurrection. It’s not tolerable for an inefficient official to inflict a punishment and rob the treasury and this ineptitude is not easily forgiven.”

Ayatollah Javadi-Amoli said, “The paper money that is paper today turns into unburnt paper in hell and torments man. If the man who doesn’t normally give the poor their rights is punished, what would happen to the usurper and the person who robs the poor.”

Tags: Javadi-Amoli 22 Bahman Iran
Short Link rasanews.ir/201soS
Share
2
Please type in your comments in English.
The comments that contain insults or libel to individuals, ethnicities, or contradictions with the laws of the country and religious teachings will not be disclosed