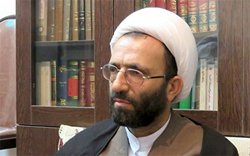 Hujjat al-Islam Salimi emphasized that Deal of the Century sounded the death knell of the Zionist regime more than ever before and said, “Muslim countries must vigilant against this conspiracy.”

RNA – In an exclusive interview with Rasa News Agency, Hujjat al-Islam Alireza Salimi, the representative of the people of Mahalat and Delijan in the Islamic Consultative Assembly, referred to the US President Donald Trump’s disgraceful “Deal of the Century” as a hollow plan and said, “This is a failed and old plan and nothing new can be found.”

His Eminence said Trump wants to give the Zionist regime artificial respiration through the Deal of the Century and added, “Trump wants increase the morale of his humiliated agents in the Middle East through this plan.”

The member of the Parliament’s Education and Research Committee emphasized the silence of some so-called Islamic countries in the region regarding the disgraceful the Deal of the Century is surprising and said, “The silence of the reactionary Arab states indicates the coordination of the Arab rulers with the hegemonic Western system. The American mercenaries in the region have quietly indicated that they are taking steps in the direction of Trump’s election campaign.”

He said that the Deal of the Century has an electoral function for Trump and added, “Without doubt, there is no way out and this plan is doomed to failure like other Western treaties.”

Hujjat al-Islam Salimi stated that Deal of the Century sounded the death knell of the final defeat Zionist regime more than ever before and added to the rate of decline of this usurping regime.

In conclusion, His Eminence noted that only Palestinians have the right to decide for their own country, not those despicable and dishonourable people like Trump and Netanyahu.