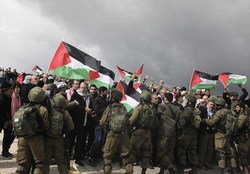 “Those who introduce plans for annexation and apartheid and the legalization of occupation and settlements are the ones who bear full responsibility for deepening the cycle of violence and extremism,” Secretary General of the Palestine Liberation Organization (PLO) Saeb Erekat said in a statement, according to RT.

His remarks came a day after Jared Kushner, Trump’s son-in-law and mastermind behind the so-called ‘Deal of the Century’, accused Palestinian President Mahmoud Abbas of urging his supporters to carry out violence.

"He calls for days of rage in response and he said that even before he saw the plan," Kushner told reporters in New York after meeting with UN Security Council members.

After Trump’s peace plan for the region was unveiled in January, various Palestinian factions had a rare moment of unity as they staged protests denouncing occupation. Trump’s plan proposes a Palestinian state in the form of several enclaves mostly surrounded by Israeli territory. While firmly rejected by Palestine, it was hailed by Israel, with Prime Minister Benjamin Netanyahu saying that his country is offering Palestinians “conditional, limited sovereignty”.