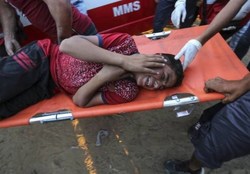 Israeli forces have killed a Palestinian and injured dozens of others taking part in protests against US President Donald Trump’s plan for the Middle East in the occupied West Bank.

RNA - The Palestinian Health Ministry announced that 19-year-old Badr Nafela had succumbed to the injuries he sustained during clashes with Israeli forces in the town of Qaffin in Tulkarm on Friday.

Clashes also erupted between Israeli troops and protesters in the West Bank cities of al-Khalil (Hebron) and Qalqilya, where people gathered in the town of Azzun to bid farewell to Palestinian police officer Tareq Badwan, who had been killed by Israeli gunfire in Jenin on Thursday.

The Palestine Red Crescent Society reported that 33 Palestinians were injured during the Friday clashes, in which Israeli forces fired tear gas and rubber bullets to disperse the protesters rejecting Trump's “deal of the century.”

Trump unveiled the plan alongside Israeli Prime Minister Benjamin Netanyahu at the White House on January 28.

The so-called deal would have, among other contentious things, enshrined Jerusalem al-Quds as “Israel’s undivided capital” and allow the regime to annex settlements in the occupied West Bank and the Jordan Valley.

The announcement of the plan, which all Palestinian groups have unanimously rejected, has given rise to indignation across different countries in the Middle East.

Protest outside US embassy in Vienna against Deal of the Century