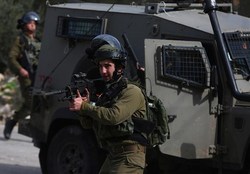 Israeli forces have shot three Palestinians dead in the occupied West Bank, which has witnessed a sharp rise in tensions since the US unveiled a contentious Middle East plan.

RNA - Palestinian media reported that the 19-year-old victim, identified as Yazan Munther Abu Tabikh, was shot dead in clashes with Israeli soldiers in the city of Jenin early on Thursday.

The confrontations erupted after the Tel Aviv regime forces demolished a house belonging to a Palestinian accused of involvement in the killing of an Israeli settler.

Meanwhile, a Palestinian officer, who was critically injured by Israeli gunfire during Jenin clashes, succumbed to his wounds..

The Palestinian Health Ministry identified the victim as Tareq Ahmad Badwan, the first lieutenant in the Palestinian police force.

Israeli police said an officer had sustained injuries to his arm and taken to the hospital for treatment.

The fatal shootings came only hours after a 17-year-old Palestinian boy, identified as Mohammad Salman al-Haddad, was shot in the heart and killed as Israeli forces attacked Palestinian protesters in the West Bank city of al-Khalil (Hebron).

Elsewhere in central Jerusalem al-Quds, the Israeli military claimed a car-ramming had left 14 people, mostly soldiers, injured, including one in a serious condition.

The Israeli army said the soldiers targeted were from the Golani Brigade and were making their way to the Buraq Wall — known to the Jews as the Western Wall — in the Old City of Jerusalem al-Quds.

Police said the driver of the vehicle had fled the scene and “a large force of officers were carrying out searches.”

“We saw three young people lying down on the sidewalk and around nine others who were also hit were standing,” Magen David Adom medic Oz Faulk said. “One person was unconscious. A 20-year-old who suffered from head and body injuries told us a car had come and run them over."

Following the first fatal shooting, the Gaza-based Hamas resistance movement called on the Palestinians to step up confrontations with Israel.

“We call for escalating confrontations with the occupation and its settlers and fighting their assaults against the land and holy sites, especially the blessed Al-Aqsa Mosque,” the group said in a statement posted on its website.

The situation is also tense in the Israeli-blockaded Gaza Strip.

Israeli warplanes attacked what they called Hamas targets in the besieged coastal sliver early on Thursday.

The Israeli army claimed that its airstrikes came “in response to mortars and explosive balloons launched from Gaza” into the occupied territories.

Violence has surged in the occupied lands following the release of US President Donald Trump’s self-proclaimed “deal of the century,” which all Palestinian groups have unanimously rejected.

Trump’s Middle East scheme largely meets Israel’s demands in the decades-old conflict while creating a Palestinian state with limited control over its own security and borders.

It also enshrines Jerusalem al-Quds as “Israel’s undivided capital” and allows the regime to annex settlements in the occupied West Bank and the Jordan Valley.

The proposal further denies the right of return of Palestinian refugees into their homeland, among other controversial terms.

Taliban say US has ‘harmed’ negotiations