Protest outside US embassy in Vienna against Deal of the Century 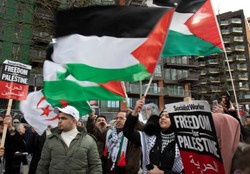 Protesters outside the US embassy in Vienna on a cold and windy day staying to express their anger at the American administration’s so-called Deal of the Century.

RNA - Palestinian demonstrators say the plan introduced by US President Donald Trump disregards their legitimate rights including the right to return for refugees and to recognize Jerusalem al-Quds as the capital of Palestine.

The American deal refers to Jerusalem al-Quds as the undivided capital of Israel and allows the regime to annex illegal settlements in the occupied West Bank and the Jordan Valley.

Analysts say the plan finally makes it clear that the US is not a fair and neutral mediator between Israelis and Palestinians, since it’s now officially supporting the extremist right-wing forces in Israel.

The Secretary General of the Society for Austrian-Arab Relations Fritz Edlinger says the official reactions in Europe were very disappointing.

Organizers of the protest say the deal translates into violating the fundamental human rights of the Palestinians, disregarding UN resolutions and violating international law. Jerusalem al-Quds they say is the capital of Palestine.