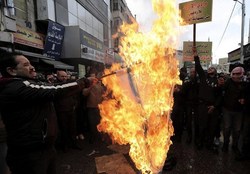 During a national conference held in the blockaded Gaza Strip, Palestinian resistance groups and people from all walks of life slammed Donald Trump’s so-called deal of the century.

RNA - Hundreds of people attended the event titled “the Deal of the century will fail”. The announcement of the one-sided deal came only six months after the Bahrain economic workshop in the tiny Persian Gulf kingdom which introduced the economic part of Trump’s proposal.

Palestinians have held rallies against the US administration over the past days. Trump’s so-called deal also prompted angry reactions from pro Palestinian activists around the world.

During the national conference participants slammed the US administration plots against Jerusalem al-Quds and the issue of Palestinian refugees. Some believe the so-called deal of the century is mainly a desperate booster shot for Netanyahu and Trump to stay in power.

In its final communiqué the national conference announced the formation of a Higher National Committee against the so-called deal of the century.

People here accuse the Trump administration of aiding and abetting the Israeli regime in its crimes against the Palestinian people. Palestinians say they will never accept Trump's so-called deal of the century. They vow to fight it with all forms of resistance.