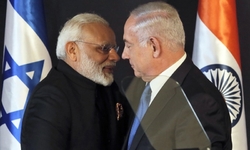 India has hailed relations with Israel as "very strong" days after it urged Palestinians to consider a contentious US-devised Middle East plan.

"Thank you very much, my friend Prime Minister Benjamin Netanyahu. India-Israel relations are very strong.... We share common values," Modi tweeted in response to his Israeli counterpart's congratulation on the 28th anniversary of the establishment of New Delhi-Tel Aviv diplomatic ties.

"Today, 28 years ago, Israel and India established formal diplomatic relations. I congratulate my friend Narendra Modi for his warm friendship. Between Israel and India, a deep friendship has emerged that is evident in our many collaborations," the Israeli premier tweeted on Wednesday.

Netanyahu had also attached to his tweet an image of himself talking to Modi in shallow waters.

The exchange of pleasantries between Modi and Netanyahu came days after India called on Palestinian to consider US President Donald Trump's self-proclaimed “deal of the century,” which all Palestinian groups have unanimously rejected.

Indian Ministry of External Affairs spokesperson Raveesh Kumar also underlined the need for "direct negotiations" between the Palestinians and the Israelis.

“We urge the parties to engage with each other, including on the recent proposals put forward by the United States, and find an acceptable two-state solution for peaceful coexistence. We will continue to follow developments in the region and engage with the parties concerned,” he said.

Trump released his proposed deal during an event at the White House alongside Netanyahu in Washington on Tuesday. The Palestinians were not involved in the scheme's development.

The so-called ‘Vision for Peace’ largely meets Israel’s demands in the decades-old conflict while creating a Palestinian state with limited control over its own security and borders.

It enshrines Jerusalem al-Quds as “Israel’s undivided capital” and allows the regime to annex settlements in the occupied West Bank and the Jordan Valley.

The plan further denies the right of return of Palestinian refugees into their homeland, among other controversial terms.

Relations between India and Israel have developed since Modi’s election in 2014.

In recent months, the Indian government has adopted several measures that are seen as discriminatory against Muslims.

In August, Modi's administration unilaterally abrogated a constitutional provision that provided a semblance of autonomy to Jammu and Kashmir, India’s only Muslim-majority state.

Four months later, New Delhi passed a controversial citizenship law that is widely denounced as Islamophobic and a threat to the country’s secular constitution.

Kashmiris view the Israeli occupation of the Palestinian territories as a parallel to their own situation after the cancellation of their limited autonomy by the Indian government.

Altaf Ahmad, who sells blankets in Kashmir's Srinagar, told Turkey's Anadolou news agency that Trump's initiative "seemed similar to what Indians did to us. Took away everything from us and then tried to convince us that it is for our own good."

"Trump's deal appears to be no deal at all," retired political scientist Noor Ahmad Baba said. "This has the lessons for Kashmir. You cannot change its political character unilaterally. This cannot happen. You have to address this issue in all its dimensions, internal as well as external."

Speaking on Friday, Turkish President Recep Tayyip Erdogan criticized Saudi Arabia and other Persian Gulf Arab nations for not speaking out against Washington's so-called peace plan for the Israeli-Palestinian conflict.

“When we look at the stance of countries in the Muslim world toward this step and the announced text, I pity us. Saudi Arabia mostly, you are silent. When will you speak? The same goes for Oman, Bahrain, the Abu Dhabi leadership,” he said in comments to members of his ruling party in Ankara.

“They even go and applaud it there. Shame on you,” he added. “Some Arab countries supporting such a plan are betraying Jerusalem, their own peoples and most of all humanity.”

Erdogan further warned that the countries, which have failed to speak out against the "deal of the century," would be responsible for “grave results."

During the unveiling ceremony of the US plan in Washington, three Arab ambassadors — from Oman, Bahrain and the UAE — were present.

In another development on Friday, UAE Foreign Minister Abdullah bin Zayed Al Nahyan posted a New York Times article on Twitter that urged the Palestinians not to reject Trump's plan.

The article posted by the top Emirati diplomat headlined, "Every Time Palestinians Say 'No,' They Lose."

Palestinians to fight against occupation, Deal of Century