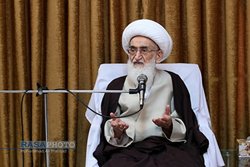 The revered source of emulation warned against the implementation of the disgraceful Deal of the Century and called on the Islamic ummah, in particular the scholars, to come to the scene to confront the serious conspiracy to destroy the Palestinian cause.

RNA – Speaking at a gathering of Indian scholars in Qom on February 1st, Grand Ayatollah Hoseyn Nouri-Hamadani referred to the important mission of scholars and clergymen and said, “In Islam, it’s planned such that a few people with Islamic ethics be among the people and invite them toward good, uprightness and happiness.”

The revered source of emulation said that today, the enemies of Islam, especially the United States and the Zionists, are trying to destroy the Palestinian cause with a new conspiracy – the Deal of the Century and said, “What greater crime and sin is there? Muslims must be united and be present on the scene.”

Ayatollah Nouri-Hamadani continued, “Islamic scholars must not be silent but must unite around al-Quds (Jerusalem) and pursue Islamic ideals. We can’t be spectators because Islam has placed a heavy burden on the scholars and everyone must fulfill their duty.”

His Eminence emphasized, “The scholars can’t be silent and be spectators until the Americans and Zionists destroy Palestine and conquer al-Quds. If the scholars and Muslims unite, they can do great things.”

He said, “Today isn’t a day to be spectators, but to come to the scene and thwart the enemies’ conspiracies. There are no geographical boundaries in Islam and all of the Muslims of the world are brothers and must be united. If we only lecture and watch, we will be responsible in front of God.”

Ayatollah Nouri-Hamadani said, “The enemies aren’t calm for even a moment and there is always a program of creating divisions among Muslims. We must never think that the enemies will give up their hatred because they have more and more opportunities to fight Islam. In such situations, we must fulfill our duties to defeat the enemies and the way to defeat the enemies is through the unity of Islamic societies.”

Tags: Nouri Hamadani Quds Deal of the Century
Short Link rasanews.ir/201skC
Share
2
Please type in your comments in English.
The comments that contain insults or libel to individuals, ethnicities, or contradictions with the laws of the country and religious teachings will not be disclosed