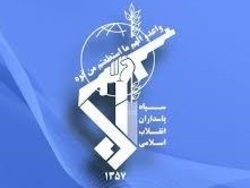 Iran's Islamic Revolution Guards Corps (IRGC) has denounced a US-hatched American-Zionist scheme, which Washington claims seeks to resolve the ages-old Palestinian-Israeli conflict, saying it would be of no avail and would end in the dustbin of history.

RNA - Iran's Islamic Revolution Guards Corps (IRGC) has denounced a US-hatched American-Zionist scheme, which Washington claims seeks to resolve the ages-old Palestinian-Israeli conflict, saying it would be of no avail and would end in the dustbin of history.

"The evil act by the president of the terrorist regime of the United States of America in unveiling the cruel 'deal of the century', which seeks to trample on and ignore the absolute rights of the oppressed Palestinian people, disintegrate their land, legitimize the fake Zionist government, guarantee Israel's sovereignty over the occupied territories, disarm Hamas, revoke the right of return for refugees and [pursues] a list of other instances of cruelty and act of aggression against Palestine, is an unprecedented crime and treason in the contemporary history," the IRGC said in a statement on Saturday.

It added that the “disgraceful” plan once again exposed US President Donald Trump's “vicious” face and the hidden nature of the White House in opposing the Islamic Ummah more than ever and also revealed the “devotion of the terrorist and inhumane US rulers” to the “devilish demands” of the Israeli regime.

The anti-Palestinian scheme added "another strategic blunder" to the “black record” of the Americans, the statement pointed out.

The IRGC said the formation of Takfiri terrorism and the US’s all-out and unwavering support for Daesh, Jabhat Fateh al-Sham and other terrorist groups in Muslim states paved the way for the unveiling of the 'deal of the century' and sowing discord among Muslim countries as one of the necessities of the plan.

It added, "The 'deal of the century' will not only fail to bring security and stability to the Zionist regime (Israel), but … like other cruel compromise schemes, engineered at the White House and in Tel Aviv, will have no outcome but failure and will fall into dustbin of history."

Pointing to the ongoing sensitive situation of Muslim countries, the statement stressed the importance of finding necessary ways to confront the US’s evil plan and expressed the IRGC's readiness to play an appropriate role in this regard.

It also urged Muslim countries to take a historic decision and counter the US plan.

Defying international outcry, Trump announced the general provisions of the scheme, which he has controversially dubbed “the deal of the century,” on Tuesday, with Israeli Prime Minister Benjamin Netanyahu at his side. Palestinian sides were conspicuous by their absence at the ceremony given their vociferous disagreement to the plot.

Iran's President Hassan Rouhani on Wednesday condemned the US president's so-called 'peace plan' for the Israeli-Palestinian conflict as 'the most despicable plan of the century.'

"Enough of these foolish attempts," Rouhani wrote on his Twitter account. "The Most Despicable Plan of the Century."

Palestinian Prime Minister Mohammad Shtayyeh on Thursday roundly dismissed the US plan, stating that the initiative was only a proposal for an apartheid system that legitimizes the Israeli regime’s colonial project in the Palestinian territories.

Speaking in an exclusive interview with CNN television news network, Shtayyeh said the Palestinian people and leadership have rejected the deal because it “simply gives al-Quds (Jerusalem) completely to the Israelis, creates a temporal and spatial division of the al-Aqsa Mosque, and keeps settlements on Palestinian land, where 720,000 settlers would remain illegally on our lands.”