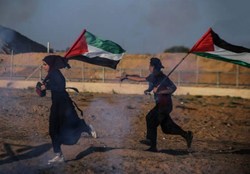 The Palestinian resistance movement Hamas has lauded the actions of West Bank Palestinians in rejecting the so-called "deal of the century" and has called for the formation of a united front against the plan.

RNA - "We indeed congratulate today our compatriots in the West Bank and Jerusalem al-Quds for their steadfastness and their extraordinary operations which challenged their calculations," said Hamas Spokesperson Fawzi Barhoum in a statement on Sunday.

"We call upon them to intensify their popular resistance efforts by using all possible means in all forms," he added.

The spokesman said that the formation of a unified front and struggle against the so-called deal of the century has become the demand of "all Palestinians".

Last week, Washington unveiled the so-called "deal", recognizing Jerusalem al-Quds as “Israel’s undivided capital” and allowing the regime to annex settlements in the occupied West Bank and the Jordan Valley, among other controversial terms.

The move has since prompted much anger and protest across Palestine, with Israeli soldiers being attacked on numerous occasions amid protests in the West Bank.

The Israeli military has sought to respond to heightening tensions in the West Bank and along the Gaza Strip by stepping up its military presence across the territories.

Earlier this week, Israel announced that it is sending additional combat troops to the West Bank. Israel has also launched several strikes against Gaza in the past week.

On Sunday, Israeli planes targeted the central town of Deir al-Balah and Khan Yunis in the southern Gaza Strip, according to local reports.

'Israel, US to face consequences'

On Saturday, Israeli Prime Minister Benjamin Netanyahu said that Israel has started drawing up maps of the occupied West Bank areas that it wants to annex under the "deal of the century".

In his remarks on Sunday, Barhoum slammed Netanyahu's remarks as "the continuation of Israeli-American hostility against the rights of the Palestinian people".

"The consequences of this continued malevolence is upon them," he said.

The spokesman added that Palestine "will forever remain for its people, the true inheritors of this land".

"The Israeli-American duo of evil will not be able to change such a reality despite's its power and dominance," he added.