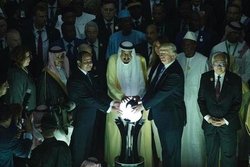 RNA - The Jewish News Syndicate (JNS) quoted the Arab sources as saying that US Secretary of State Mike Pompeo and his team have been mediating between representatives from Israel and Saudi Arabia over the past few months to set up the meeting.

“In recent days there have been very intensive discussions between Washington, Israel, Egypt and Saudi Arabia to arrange a summit meeting in Cairo as early as the coming weeks, even before the election in Israel,” one of the Arab sources told JNS. Israel is scheduled to hold a general election on March 2.

Aside from the host, Egypt, the sources said, the summit “will be attended by the United States, Israel, Saudi Arabia and also the leaders of the United Arab Emirates, Sudan, Bahrain and Oman.”

According to the report, Jordan’s King Abdullah declined an invitation to attend the summit in Cairo. The monarch wanted to include Palestinian Authority leader Mahmoud Abbas.

A senior Palestinian official confirmed the report, noting that the Palestinian Authority is likely to reject any invitation, since “Abbas and the leadership in Ramallah will continue to adhere to their boycott of Washington and to freezing diplomatic ties with Israel.”

The Palestinian official said the US hinted to the Palestinians that “this would likely be Abbas’ and the Palestinians’ last chance to climb down from the tree and partake in the diplomatic developments unfolding in the region."

Earlier this month, the Hebrew-language "Israel Defense" magazine cited sources as saying that Israeli authorities were working hard to arrange a meeting between Netanyahu and MBS in the kingdom.

Saudi Arabia has been one of the main supporters of the plan Trump unveiled alongside Netanyahu at the White House on January 28.

The so-called deal would, among other contentious things, seek to enshrine Jerusalem al-Quds as “Israel’s undivided capital” and allow the regime to annex settlements in the occupied West Bank and the Jordan Valley.

The plan has been rejected by all Palestinian groups.

Israeli authorities have been injecting more momentum to their efforts to publicize their clandestine relations with a number of Arab countries, particularly Persian Gulf littoral states.

Israel has full diplomatic ties with only two Arab states, Egypt and Jordan, but latest reports suggest Tel Aviv has been working behind the scenes to establish formal contacts with other Arab countries such as the United Arab Emirates, Saudi Arabia and Bahrain.