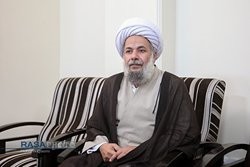 Hujjat al-Islam Bonyadi said that putting the Fatimi lifestyle into practice is essential and added, “Lady Fatimah al-Zahra’s life demonstrates that she wasn’t indifferent to even the smallest of issues.”

RNA – In an exclusive interview with Rasa News Agency, Hujjat al-Islam Hoseyn Bonyadi said that the lifestyle of the Ahl al-Bayt, especially that of Lady Fatimah al-Zahra, has been introduced as a model in religious books and said, “She wasn’t just a model in terms of speech and mere commands but rather the practical tradition of the Ma’sumin (Infallibles) has also been such that it has attracted the community and the people toward itself.”

The vice-president of the General Assembly of the Society of Seminary Teachers of Qom said, “The most important point in the tradition [of the Prophet] regarding life is to live according to knowledge, that is, the law and the intellect must be involved in all dimensions of man’s life and in this context of law and reason, man can find a pure life.”

Hujjat al-Islam Bonyadi added, “The important point in this regard is to take the lifestyle of the Infallible Imams, especially the lifestyle of Lady Fatimah al-Zahra, as one’s model such that man must be able to find this model in their lives.”

His Eminence referred to the fact that following the Fatimi lifestyle is important and only recognizing it isn’t sufficient and added, “The life of Lady Fatimah al-Zahra, in both the emotional dimension and the different aspects of life, demonstrate that she wasn’t indifferent to the smallest and greatest issues of life.”

He added, “Unfortunately, indifference is the most important impairment to a healthy and purposeful life. However, in addition to training her soul, Lady Fatimah al-Zahra entered into the issue of training children and bringing them up in a society with many emotions with complete recognition and knowledge.”