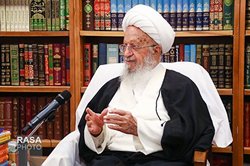 The revered source of emulation emphasized that the unity can’t be achieved without respect for the beliefs of other Islamic denominations during a meeting with the representative of the Supreme Leader of the Islamic Revolution in Hajj and Pilgrimage Affairs.

RNA – Grand Ayatollah Naser Makarem-Shirazi met with Hujjat al-Islam Abdol-Fattah Navvab, the representative of the Supreme Leader of the Islamic Revolution in Hajj and Pilgrimage Affairs and the guardian of Iranian pilgrims and his accompanying delegation.

At the beginning of the meeting, Hujjat al-Islam Navvab presented a report in regard to the August 2019 Hajj as well as the ongoing plans for the next Hajj [July-August 2020] and Ayatollah Makarem-Shirazi described the report as hopeful and wished success for all those involved in Hajj and pilgrimage affairs.

The revered source of emulation referred to the continuing of the Hajj as the honour of Islam and Shi’ism and speaking about important recommendations, he emphasized the need to provide the necessary training to the Hajj pilgrims.

He emphasized the necessity for the Hajj pilgrims to attend training courses organized by the Hajj and Pilgrimage Affairs organization and stated, “The results of the training provided to the Hajj pilgrims must be such that the Iranians who go to Hajj are exemplary in terms of politeness, ethics, and behaviour and a model for the pilgrims of other countries.”

Ayatollah Makarem-Shirazi said respect for the sanctities of different Islamic denominations is an important principle and added, “Attention and commitment to this vital and important issue is needed in all places and situations but during the Hajj, it becomes more and more sensitive.”

The renowned teacher in the Islamic Seminaries reiterated, “Today we are in a situation where we need more unity than ever before and it must be noted that the realization of this matter can’t be achieved without respect for the beliefs of the other Islamic denominations.”

He described Iranophobia and Shiaphobia as among the weapons of the enemies and arrogant powers and said, “The media of the arrogant powers is always trying to present an inverted reality of the Islamic Republic of Iran. Various delegations coming to our country admit that the reality of Iran is far different from that being portrayed in the media.”

Ayatollah Makarem-Shirazi stated, “In such circumstances, we must break the atmosphere with proper presence on the scene, correct missionary work and more importantly, good conduct. The Hajj pilgrimage is a good opportunity to realize that the pilgrims must create a role by acting in this direction.”

He added, “Today, the arrogant powers and the West are planning and acting through attacks and political propaganda on the one hand and planning and acting by promoting Wahhabism with religious propaganda against us on the other hand and we must demonstrate our true nature to the world by acting in an Islamic manner, while having purposeful plans to counter these attacks.”