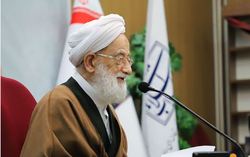 Ayatollah Emami-Kashani referred to the connection between the Islamic government and the Islamic system with its uprising said, “There has been no such thought like Mahdism in the history of the enemies.”

RNA – Ayatollah Mohammad Emami-Kashani, the interim Friday prayer leader of Tehran, spoke at a conference entitled “Theory of Expectation in the Thought of Ayatollah Khamenei,” which began on January 23rd at the Institute of Islamic Science and Culture in Qom and explained that the principle of the subject of Mahdism goes back to the issue of awaiting and said, “If we take the issue of awaiting from the narrations on the subject of Mahdism, which are about 5,000 hadiths, nothing remains and it becomes meaningless.”

The head of Shahid Motahhari Seminary pointed out that no issue in history has faced so much hostility as the reappearance of Imam al-Mahdi and said, “One of the fiercist enemies of this issue is the Roman Catholic Church, which even interprets Bible prophecies concerning the coming of the Saviour and the transformation of the world to the Day of Judgement and the Second Coming of Jesus Christ.”

He said, “We must never neglect to pray and resort for the reappearance and the coming of the saviour and just as in the various supplications and whispered prayers, there have been many favours from the Imam al-Mahdi.”

In another part of his remarks, Ayatollah Emami-Kashani pointed out the importance of reciting Du’a al-Ahd [Supplication of Allegiance] with an understanding of it and said, “There are many expressions in this supplication, including one where we ask God to relieve us of our difficulties through Imam al-Mahdi.”

His Eminence stated that the enemies of Islam are working together to destroy the Islamic Revolution and said, “We pray for those who are fighting the enemies in Iraq, Syria and elsewhere and also we must not be negligent of our beloved leader.”

He continued, “We must strive so that we are all those who are the true awaiters of Imam al-Mahdi and to be one of those who truly embody the noble hadith that ‘the best of the ummah accompany the righteous of the Ahl al-Bayt.’’’

Ayatollah Emami-Kashani remembered Haj Qasem Soleymani as a clear example, “You saw how magnificent the reception of the Islamic Resistance Front was for this great commander and what a strange action they demonstrated.”

Tags: Emami Mahdism Imam Mahdi Soleymani
Short Link rasanews.ir/201sh4
Share
2
Please type in your comments in English.
The comments that contain insults or libel to individuals, ethnicities, or contradictions with the laws of the country and religious teachings will not be disclosed