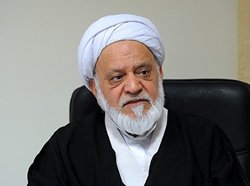 Hujjat al-Islam Mesbahi-Moqaddam said, “For the friends of the Islamic Revolution, the message of Ayatollah Khamenei’s magnificent and strong Friday prayer sermon is not to forget the martyrdom of Haj Qasem Soleymani.”

His Eminence said that the epic created by the people in his funeral ceremony and the escorting of his body must not be neglected and added, “According to the statement of the Supreme Leader, this epic was a ‘Day of God’ because the people gave a strong response to the cowardly action of the United States in martyring Haj Qasem Soleymani with their glorious presence.”

He described the reason that this Day of God was a day of “tough revenge” by the Islamic Revolutionary Guard Corps (IRGC) on the United States’ Ayn al-Asad Airbase in Iraq is due to the fact that it led to the collapse of the American hegemony in the region and added, “The infliction of heavy blows on the Ayn al-Asad Airbase was another defeat inflicted on the United States’ by the Islamic Revolution.”

Pointing to the need for people to pay attention to these two Days of God, the first being the martyrdom of Haj Qasem Soleymani and second being the IRGC’s tough revenge against the United States, he emphasized, “Undoubtedly, the hand of God’s power and will lies behind these two Days of God and we must not forget them.”

Hujjat al-Islam Mesbahi-Moqaddam said that today we are witnessing the better growth and progress of the Islamic Revolution in the region and the world and added, “It’s worthwhile for the Islamic, oppressed and deprived nations of the world to unite with each other and inflict more blows on the arrogant powers of the world.”

He emphasized that the arrogant powers of the world must learn from the defeats that they have suffered and no longer attack the Islamic Revolution and the region and stressed, “The Iranian people must become stronger against their enemies.”

Tags: Mesbahi Moqaddam Iran USA Ayn al-Asad Soleymani
Short Link rasanews.ir/201sh3
Share
3
Please type in your comments in English.
The comments that contain insults or libel to individuals, ethnicities, or contradictions with the laws of the country and religious teachings will not be disclosed