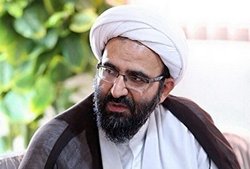 Hujjat al-Islam Rahimi-Sadeq pointing out that the Friday prayer sermon of the Supreme Leader of the Islamic Revolution, Ayatollah Khamenei, in Tehran on January 17th was a source of a relief for Iran.

RNA – In an exclusive interview with Rasa News Agency, Hujjat al-Islam Mohammad-Hadi Rahimi-Sadeq, the director of the Islamic Seminaries of Tehran Province, referred to the events of the last two weeks and said, “We have witnessed many bitter and sweet events over the last two weeks.”

His Eminence added, “The brutal assassination of the brave general Haj Qasem Soleymani, the commander of the Quds Force, caused a huge shock to the public and plunged the country into public grief. The next event was his magnificent funeral which was attended by millions of people and there was a great resurrection in society.”

He continued, “This noble martyr captured the hearts and acted as a powerful driving force of the Islamic society at the beginning of the second phase of the Islamic Revolution and faced a exceptional leap in the culture of self-sacrifice and resistance in society.”

His Eminence added, “The authority shown to the world by the holy system of the Islamic Republic through this attack has led to the weakening of the regimes which are tied to the United States, such that even the fake Israeli regime and reactionary Arab countries will be taken into account for their own actions.”

He added, “As interpreted by Ayatollah Khamenei, these two victories were two examples of the ‘Days of God.’ It’s natural that these blows were hard and unpleasant for the Americans and for this reason, they tried to launch new schemes and plots by exploiting the ambiguities of the plane crash to bring new challenges for the system and divert public opinion from these two issues.”

Hujjat al-Islam Rahimi-Sadeq pointeds out that the apocalyptic seditions are the true face of the hypocrites and emphasized, “We were at a time when all enemies came to the surface with all their schemes, plots and power and came to the battlefield and the scene of the Battle of the Parties was formed. In this context, the atmosphere of sedition is very complex but there is no need to worry about sedition revealing the true face of the hypocrites and the people will come to know it.”

He said, “What our dear people must take into account in this situation is to overcome this critical stage by employing vigilance and insight away from any rumours, frustration and divisiveness centred on the dear Supreme Leader.”